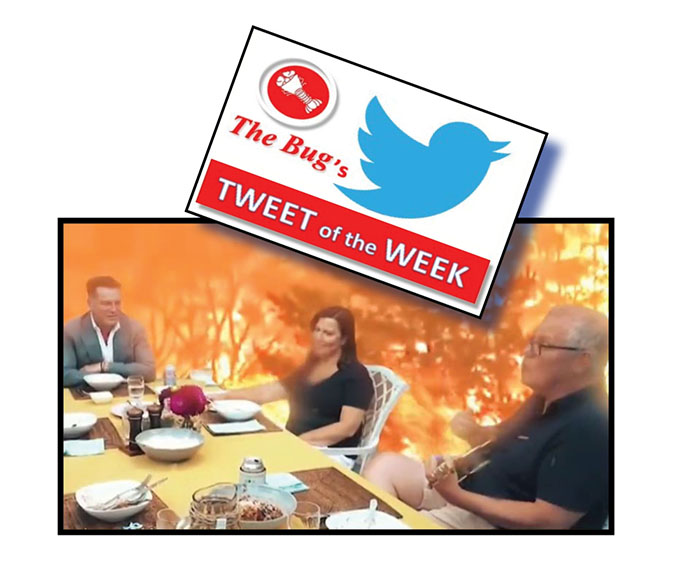 The Twitterverse really went off this past week as soon as the Channel 9 promo for last night’s 60 Minutes “interview” with the Morrison family showed Smoko strumming a ukulele and pretending to sing Dragon’s classic April Sun in Cuba.

So many clever memes appeared showing the clip with some more appropriate songs dubbed over the PM’s rendition. They were many and varied but our Tweet of the Week judges selected the one above as among the best.

The song overlay was Dennis Leary’s Asshole with the firestorm background referencing the Morrisons’ decision to fuck off to Hawaii while Australia burned. That’s Hawaii, often associated with the ukulele! Clever.

As we are unsure of the creator of that meme – an earlier version also used Asshole without the fires in the background – we’ll leave details of who tweeted it off. If the originator wants a credit, please let us know.

On the same theme was luis neto @luineco who deserved mention just for his “Pentecostal parasite” jibe and passing nod to Peter Costello.

Media Anaylst @MediaAnalystOz and Sandra N @attempt57 didn’t hold back on what they thought of Jenny Morrison.

And Winnie Lau @WinnieLau mused on comments made on the ABC Insiders program on Sunday by two of the panelists.

Politic@l Spinner @LesStonehouse heaped praise on whoever cooked up the ukelele idea and Tee Zee with a whole swag of symbols @tee_asz saw a great future for Smoko in a post-politics career.

Several Twitterers took in that all-night House of Representatives sitting with astute observations of their own: Daniel James @MrDTJames and johnford @johnfordaust

While Thomas Stephen @TomStephen01 reflected on Question Time and, indirectly, the amazing abilities of the new Speaker.

Finally, we simply must finish off with some observations about two of the biggest psychos in the Parliament, seeing poor Jenny Morrison was so saddened and upset about her psycho husband being called, among other things, a psycho. So here’s Bronwyn Clark @BronwynHill1, Dead Parrot Society @MyFirstCousin and Six of one @fithissy.

EDITOR’S NOTE: The incomparable Ronni Salt @RonniSalt used Twitter during the week to tear strips off the very notion in Channel 9’s promos of the 60 Minute non-expose that somehow Jenny Morrison is Smoko’s secret weapon.

The Bug ran her detailed accunt of how many times Jenny has been rolled out to give hubbie a boost when he’s in the shit. We paid homage to her wonderful research and her ability to blast bullshit in a post from our ranter-in-residence.