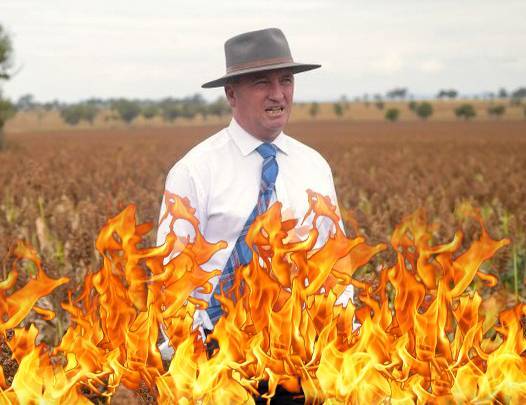 National Party leader and former deputy prime minister Barnaby Joyce says there is no need for the Tamil family held in immigration detention for four years to thank him for their imminent return to the Queensland town of Biloela.

Speaking prior to sustaining minor burns when a spontaneous bushfire broke out during his news conference outside Tamworth in his New England electorate, Mr Joyce (main picture) said the fact the family would be returning to their adopted home town was thanks enough for him.

“As the widely acknowledged greatest retail politician in Australia I knew that I was on solid ground with my vocal and unwavering support for the Biloela four during my time on the parliamentary backbench after resigning my party’s leadership in February 2018,” he said.

“You might recall how vigorously I pursued the issue of having the family released from inhumane detention conditions and returned to the town that loves and wants in the period before my return to the second highest political office in the land in June last year.

“I can assure you that after I was returned for my second stint as Deputy PM I did all that Australians expected me to do. Absolutely.

“Still, I am pleased that I got the result I wanted this week. But no thanks is necessary. I am, as always, very happy to have done what I done, err…. what I did.”

Mr Joyce went on to explain his approach to the Biloela four mirrored his stand on climate change policy – vaguely supporting a government decision while freelancing in public comments to suit his own personal political agenda.

But the bushfire broke up the news conference and forced Mr Joyce to seek medical attention at the Tamworth Hospital.