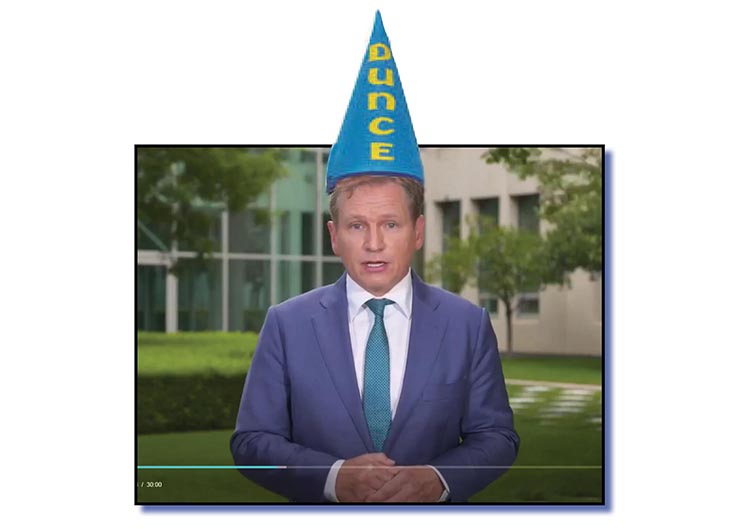 You dolt. You nincompoop. You halfwit. You ignoramus.

And may a special extra dollop of slanderous shame of any other suitable name be dumped on your head, seeing you’re a senior ABC politics reporter who supposedly should know better.

If the MGH were Ita Buttrose, we’d have shown you the door not long after your report on ABC News on Tuesday night.

Don’t take our word for it. Take his, from Tuesay night.

“What’s clear at the start of this election year is that [Morrison] is not the asset he was to the Liberal Party in 2019 when he almost single-handedly won the election for the Coalition”.

Andrew, draw in close as we explain – and it won’t be for the last time, unfortunately – NO, HE FUCKING WELL DID NOT ALMOST SINGLE-HANDEDLY WIN THE 2019 ELECTION!

This unqualified “statement of fact” observation by you – and far too many in the mainstream mediocre have done the same – perpetuates the myth that somehow Morrison has special marketing skills bordering on the miraculous and his brilliance on the hustings, drawing quiet Australians to his cause by endless photo-ops and a litany of lies about Labor, has no equal.

For make no mistake: claiming Morrison basically won the election off his own bat, without qualification, is laudatory. It screams he did an amazing job and deserves congratulations for it. It perpetuates the myth that he’s really very good at what he does, meaning he can never be counted out as an election victor regardless of circumstances.

The bottom line is that Morrison had fuck all to do with the 2019 result, a tragic outcome for Australian democracy. The party that deserved to win on the strength of a number of carefully thought-out policies, properly costed and presented for public scrutiny over time, was taught never to do that again.

The sad reality is that Morrison limped across the finish line on the back of an unprecedented $82 million (perhaps more) largely virulently anti-Labor advertising blitz, much of it in the final weeks, by that worker-hating fat slob Clive Palmer.

Morrison can’t accept credit for the billions of dollars of at times criminal gold-standard pork-barreling that took place before the election, because he says he had a hands-off role in that porkathon.

Morrison can’t accept credit for the last-gasp but very effective Labor death-tax scare because all evidence points to it being largely driven by party central, Josh Frydenberg and Palmer.

In summary, Morrison can’t accept any credit based on any identifiable brilliance on the hustings. Some of his media stunts were laughable – his attacks on electric vehicles and his claim that Labor wanted to steal voters’ weekends – and he clearly lost his debates with Bill Shorten.

While the MGH and The Bug generally will never, ever, overplay the value of NewsCorp’s effectiveness in steering election results to their whim (there’s a lot of evidence to the contrary), we also give Morrison no credit at all as he wobbled his fat arse through a series of sporty, drinky, thumbs up from cockpits and tooting truck horns photo-ops to show what a daggy-dad, sports-loving, knockabout sort of guy he isn’t while Murdoch’s shit rags hammered Shorten over the cost of climate-change action.

Credit him if we must with the mountain of lies against and distortions of just about all of Labor’s policies that made its perennial Medibank scare look the tiniest of molehills, but the bottom line is that the polls showed him going further behind until right at the bitter end when something sure as hell happened but, lean in close again, Andrew – IT HAD FUCK ALL TO DO WITH MORRISON’S ALLEGED MARKETING AND CAMPAIGNING SKILLS!

And even if you and others in the mainstream mediocre want to persist with this “Morrison virtually did it on his own” shtick, at least don’t give the impression that what he achieved was in any way, honourable or decent.

Morrison’s limited contribution to the LNP win – that litany of lies about Labor, the photo-ops and the constant disgusting personal attacks on Shorten – are absolutely nothing to be proud of – or to be lauded by politics writers as being almost the sole reason for the 2019 outcome.

Even his “we’ll let you taxpayers keep more of your own money” pitch to inherently greedy Australians – and no-one knows greed better than the Liberals – was a rerun of a Fizza’s (Malcolm Turnbull’s) line from the election before.

So here’s our challenge to you, Andrew. If you want to defend your “Smoko did it virtually on his own” line and try to clinically dissect and dismiss all the other factors we’ve mentioned in this spray, send us a thousand words – fuck it, write as much as you want seeing we won’t be paying for it – and we’ll gladly run it all.

We’ve called you all sorts of things. Be a man, get angry and tell us why we’re wrong.