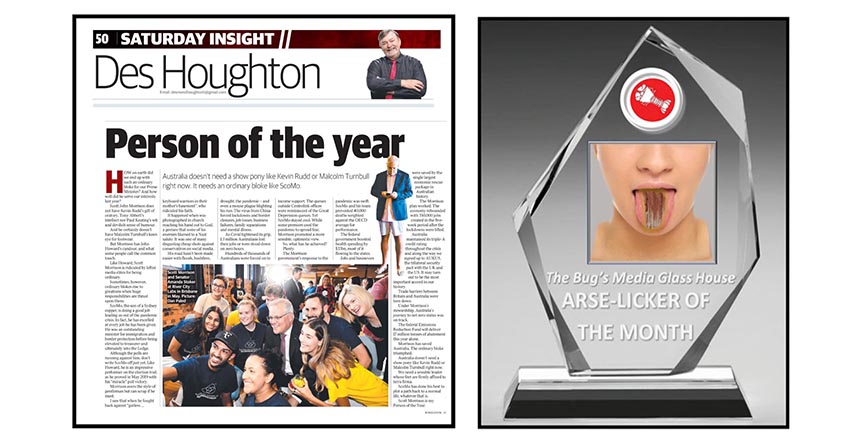 He cleaned up in more ways then one with a mighty effort very early in the month when in a column for The Courier-Mail he declared Scott Morrison his person of the year for 2021. The Courier-Mail is published out of the LNP’s Bowen Hills branch.

As one of the elite panel of judges told us: “We kinda felt sorry for other scribes, mostly but not exclusively from News Corp, who put in entries in the following weeks. The title was done and dusted as soon as Des’s piece was published.

“In fact some of our judges put down their assessment clipboards as soon as they read the column’s standfirst and the opening paragraphs.

So for all you Buggers out there who want to read what Des wrote, please put on some extra-strength Kimbies now.

Ready? Here was the standfirst, taken from the guts of Des’s glowing tribute to Morrison.

Still with us or do you want to up your Kimbies strength factor now? Or put on a second pair just to be safe?

Here are the opening paragraphs.

How on earth did we end up with such an ordinary bloke for PM?

But Morrison has John Howard’s candour (overflow alert!) and what some people call the common touch.

Okay, we think it’s probably for the best that you Buggers out there rip off those Kimbies, keep the daks/panties off and plop a bucket underneath you instead for what’s to come.

Like Howard, Scott Morrison is ridiculed by leftist media elites for being ordinary.

Sometimes, however, ordinary blokes rise to greatness when huge responsibilities are thrust upon them.

Can we be blunt here? Our judges didn’t read anymore of this risible right-wing rubbish. They just threw down their clipboards and to a man and woman simply shouted: “WINNER!” There was some spirited debate that the trophy should be renamed the Des Houghton Perpetual Trophy.

And we don’t think you should be subjected to the rest of the colon … sorry … column either. So here’s a brief summary.

ScoMo, the son of a Sydney copper, has excelled at every job he has been given.

He fought back against ‘gutless keyboard warriors in their mother’s basement’ who ridiculed his faith.

Houghton leaves a word out of the next paragraph; perhaps it’s hard to type when you’ve got a rock-hard mongrel hindering your view of the keyboard.

It happened when was photographed in a church reaching his hand out to God, a gesture that some of his enemies likened to a Nazi salute. What’s a missing “he” in the overall scheme of things?

Most of the paragraphs that follow read like LNP talking notes for the looming election but during the coronavirus pandemic Morrison stayed cool while some premiers used the pandemic to spread fear.

Morrison achieved plenty. The Morrison government’s response to the pandemic was swift.

So left’s finish with a typical Houghton flourish.

Australia doesn’t need a show pony like Kevin Rudd or Malcolm Turnbull right now. We need a sensible leader whose feet are firmly on terra firma.

ScoMo has done his best to plot a path back to a sensible life, whatever that is.

Scott Morrison is my Person of the Year.

Maybe we should apologise for not suggesting our readers replace their piss bucket with a chuck bucket?

For there’s no doubt at all that any one of us could have safely eaten a meal off the upturned and uncovered arseholes of Rupert Murdoch and Scott Morrison for quite a while after Houghton’s piece was published without the slightest hint whatsoever – either visually, gustatory or olfactorally, of even the barest skerrick of shit left anywhere in the general vicinity.