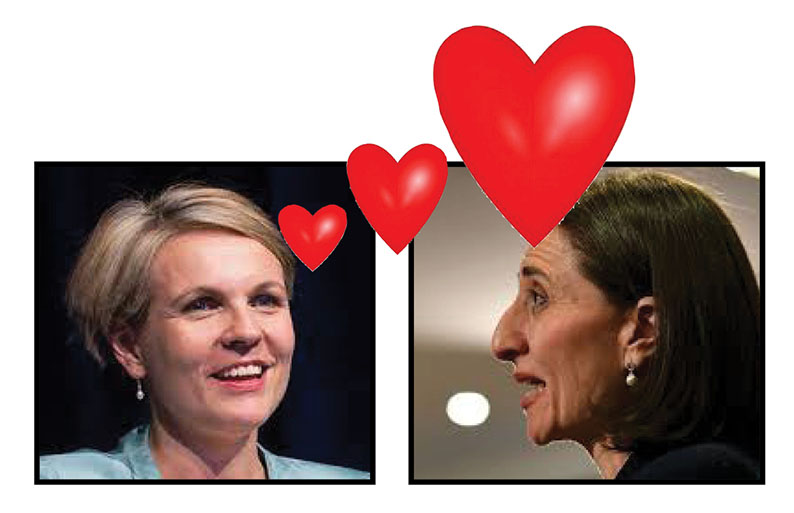 What do they say about nice people … and where they finish in life?

Last, right? Or at least a distant second. And in politics, second by any margin is last.

Apart from given me the strong feeling that she should now never, ever, lead Labor federally, what on earth did Plibersek think she was going to achieve by thanking Berejiklian for her “hard work managing COVID”?

Was it some sort of The Sisterhood of the Travelling Political Pants thing? One successful female politician paying womanage to another female pollie who broke through the glass ceiling of a male-dominated business?

And what the fuck did Plibersek possibly see in anything Berejiklian has done in combatting the coronavirus pandemic that deserved such praise?

Berejiklian’s role in the Ruby Princess disaster? Berejiklian’s constant political attacks on Labor states for their approach to lockdowns? How dare they put people’s health before wealth! Her gloating over vaccination rollouts because her state got more than their fair share of phials? Her constant arrogant boastings that NSW had the gold standard for dealing with COVID-19 that didn’t require those damaging lockdowns? Berejiklian’s own “mockdown” that has clearly been the cause of the current Delta surge across state borders? Followed by very embarrassing tough, far-too-late lockdowns of her own?

As one female pollie to another, Plibersek could easily have said to Berejiklian thanks for your service. “For your sake, I hope your claims to complete innocence – to have always behaved with honour and integrity – are vindicated when ICAC completes its investigations” would have been nice. Something mushy like that.

Or if she wanted to be just a little bit tougher, some form of clever words that got across the message, to paraphrase a certain t-shirt that Malcolm Fraser should have worn: “You were one but at least you had one!”

Maybe we should be thankful that Twitter’s character restrictions prevented Plibersek from sugarcoating other, shitty, disgusting, rotten things Berejiklian has done, not the least of which was her answers before ICAC last year that were as dodgy as Daryl himself, her declaration that the massive level of porkbarreling she used to scrape to a narrow victory in the last NSW state election was okay because “both sides do it” and her cowardly withdrawal from daily COVID-19 pressers because the infection was spreading and the deaths were rising.

Plibersek should reflect on the fact that the very day she was praising Berejiklian, Tim Wilson was being promoted in the Morrison ministry for his role in that disgraceful, taxpayer-funded, travelling parliamentary road show that shattered every basic principle of ethical and decent parliamentary procedure and practice to turn Labor’s franking credits policy into a pensioner-tax attack and Liberal Party fundraiser.

That’s how the Liberals do things, Ms Plibersek. They play deceitful, dodgy, dirty, disgraceful politics 24-7. Every time they open their mouth it’s to praise themselves or denigrate Labor. It’s not an election-cycle thing; it’s a year-round thing.

Being nice is not in their DNA and they win more than their fair share of close elections because of that.