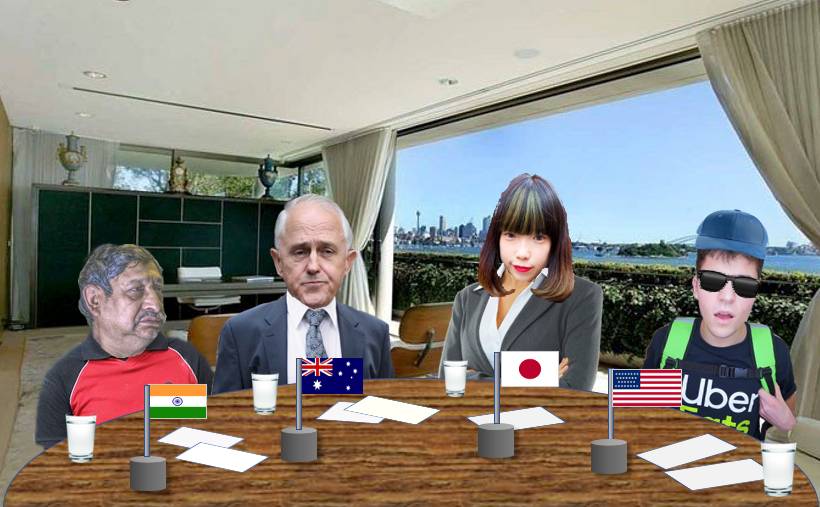 Neighbours of former prime minister Malcolm Turnbull have expressed their concerns about his state of mind following their attendance at a meeting of the “Quad security partners” at his Sydney harbourside mansion.

A neighbour of Mr Turnbull who spoke to The Bug on condition of anonymity said he was now deeply concerned after attending the event.

“I really think Malcolm has just ‘lost it’, as they say,” the man said, noting that the  meeting at the Point Piper residence of Mr Turnbull and his wife Lucy late last week was held at the same time Australia’s Prime Minister Scott Morrison was meeting other Quad nation leaders from the USA, India, and Japan during his visit to Washington DC.

“My wife and I received a formal invitation in our letterbox last week to attend the so-called ‘Quad summit’ as ‘official observers’,” the neighbour said.

“The printed invitation looked very official, bore the Australian coat of arms, and was issued by something called the Office of the Prime Minister in Exile.”

The neighbour said he and his wife were surprised to find themselves just two of a handful of people at the house of Malcolm Turnbull and his wife Lucy on the day of the “Quad summit”.

“The other ‘official observers’ there were also neighbours who, like me and my wife, had attended out of curiosity,” he said.

“The so-called ‘Quad meeting’ consisted entirely of Malcolm making a very lengthy opening statement about the global geo-political situation with particular reference to Asia and the Indo-Pacific region.

“That was followed by Malcolm asking himself a series of lengthy questions to which he gave equally lengthy and detailed answers.

“During a mid-answer break for afternoon tea I spoke to the other ‘Quad leaders’ and discovered they were a local Point Piper shopkeeper of Indian heritage, a Japanese airline hostess, and a young American exchange student who works as a food delivery rider in the neighbourhood.

“My wife and I later spoke to other neighbours and we all more or less laughed off the event as Malcolm just being Malcolm.

“But our lighthearted attitude didn’t last long, especially when we all received another invitation – this time to attend the 2021 UN Climate Change Summit running at Malcolm’s place for a fortnight from the end of October,” the neighbour said.