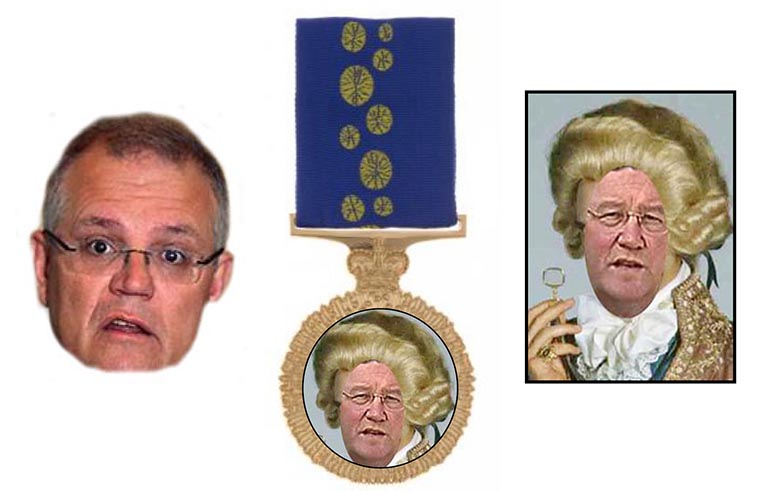 Prime Minister Scott Morrison has been awarded an honorary doctorate in sophistry by a panel of the nation’s most respected linguistics scholars.

The award follows the PM’s declaration yesterday that Australia’s COVID-19 vaccination rollout would now be lagging horribly behind if only the Pfizer vaccine had been used.

Sophistry is the use of clever but false arguments, especially with the intention of deceiving.

“The prime minister yesterday gave a masterclass in sophistry that simply had to be recognised in a meaningful way,” said Professor Ima Wordsmith of the Australian Board of Linguistic Studies.

“As fallacious arguments go, that effort by Mr Morrison is peerless; to be honest, it left myself and my fellow board members speechless, and that’s no mean task I can tell you.

“And with his honourary doctorate comes the Lord Alexander Downer Medal that honours the man regarded as the nation’s top sophisist in Australian politics before Mr Morrison elevated the craft to never-thought-possible new levels.

“Weren’t the words used by the PM yesterday breathtaking in their sophistry?

“There was never a suggestion that Australia should rely on just one vaccine type and yet building on that nonsense assumption, the PM has concocted a scenario that attempts to camouflage his government’s monumental stuff-up in not buying large quantities of Pfizer vaccines when they were first offered.

“It’s a complete nonsense yet in its sophistical simplicty it’s one our executive is sure the likes of Chris Uhlmann and Phillip Coorey and, sadly, far too many others in the mainstream media would have swallowed hook, line and sinker.

“Imagine an equally gifted sophicist on the other side of politics who could challenge the PM’s boast that his government had favoured a home-produced vaccine by producing figures to show where the rollout would be now if only Astra-Zeneca had been used!”

Asked whether the Prime Minister’s argument that people such as those in the Labor Party who had pressed mid last year for a number of vaccine types to be procured were “hindsight heroes” was another example of sophistry, Professor Wordsmith replied: “No, that’s just marketing spin … pure unadulterated bullshit.

“That’s an entirely different aspect of language use yet one worthy of the highest possible recognition as well.

“The PM would also call out as ‘hindsight heroes’ all those fire chiefs who demanded a meeting with him to outline the urgent action needed before the Black Summer fires.”