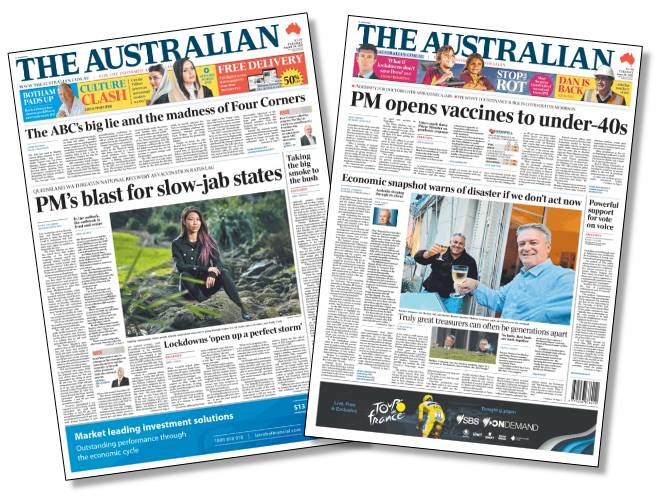 Our Media Glass House analysis teams were set a task earlier this week – to tally the number of stories News Corp Australia publications around the nation have published in response to last Monday’s Four Corners program on the ABC which dared to raise questions about the editorial integrity of Rupert Murdoch’s far-right US outfit Fox News.

The sensitivity of News Corp Australia and presumably the US citizen who sits at the head of the corporate tree was obvious by the swift and severe reaction displayed to the first instalment of the ABC’s two-part program.

We show you a selection of articles, and we mean a selection because the ones we cut and pasted were not the sum total of anti-ABC yarns taking up hectares of space in Rupert’s rags around the nation. (pictured)

Members of our MGH teams were exhausted just trying to keep up and needed to be sent home to have a rest after trying to monitor the barrage of stories attacking Four Corners and the national broadcaster’s own editorial integrity as well as the professional reputation of reporter and Washington-based correspondent Sarah Henderson.

In the end we relied on analysis by The Guardian Australia which yesterday revealed News Corp had published 45 anti-Four Corners stories in just two days. (pictured)

There will no doubt be more before and after Monday night when the second part of the Four Corners’ report airs.

One task our MGH analysis teams could determine before being sent home to recuperate from stress, was a comparison of the response to the Four Corners episode and the reporting in News Corp Australia outlets of the blatant political rorting by the Morrison Government of taxpayer funds from the $660 million fund designed to build car parks at railway stations to cut congestion.

That’s why we pose the question in the headline above.

The front page on the left is from The Oz on Tuesday this week, the day after Four Corners aired its Fox News, story and shows the front-page treatment given to attacking the ABC with even more inside. The other front page is from June 29, the day after the car park rorts story broke.

You’ll note there is not a mention of the massive pork barrelling effort uncovered by the Australian National Audit Office.

While all other media in the country went to town on the story, you would have needed to go to page two of The Oz to find a very slim story about how the Morrison Government had been caught with its grubby hands in the taxpayers’ pocket nicking and misdirecting buckets of cash to prop up Liberal Party MPs and candidates.

A few days later The Oz ran a short comment piece by one of its scribes about the rolled gold pork barrelling effort. (pictured)

Since then? Bugger all. By our count The Oz has run just two more pieces on the rorts in the past month when, if you search the interweb, you will find story after story in other media outlets.

Unlike News Corp Australia, other media are obviously not letting the government off the hook.

To their credit, Nine’s 6pm news out of Sydney – and we do tend to be a tad critical of them from time to time – ran two long stories on the carpark rorts that didn’t miss the Morrison government.

It’s nice to know there are media outlets out there that don’t behave like the federal Liberal Party’s ad agency.

Many years ago the then Kerry Packer-owned Women’s Weekly magazine changed to monthly publication, but retained its original title.

We were reminded of this when News Corp announced the resurrection of two of the dozens of hard-copy newspapers in regional Queensland it had previously shut down because they couldn’t make ends meet in this digital world.

Both the Daily Mercury in Mackay and the Sunshine Coast Daily have returned with print editions today. (pictured)

But the catch is they will appear on newsstands only once a week, every Friday.

Yes, we know they each have an online edition that justifies the “daily” tag, but we couldn’t help having a dig. We certainly hope News Corp outlets don’t come after us as hard and as fast as they did Four Corners.

We do wonder why Rupert’s head honchos in Australia have made the move back to print, even in a limited form.

Could it be that somewhere in both of the Mackay and Sunshine Coast regions a local publication has sprung up to replace the shutdown Rupert fishwrappers and is snaring the ad dollars that once went Rupert’s way?

If Rupert is true to form he will undercut his own ad rates until the competition shuts down, then he’ll shut down his new daily weeklies too.