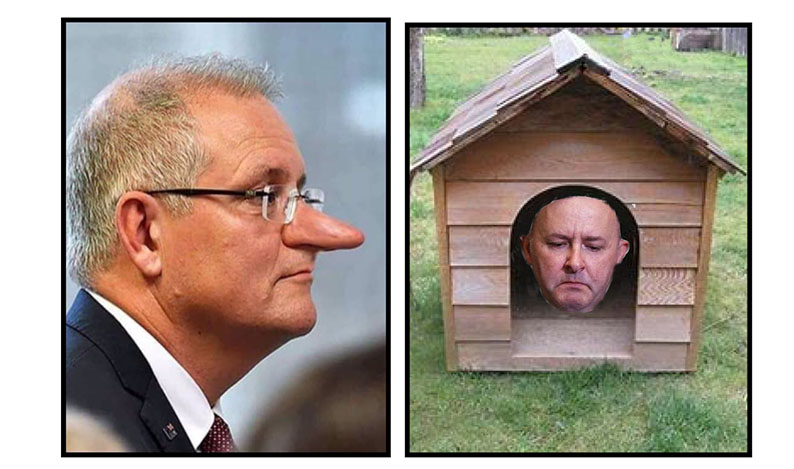 Almost as tragic as Smoko Morrison’s miracle-less win at the 2019 federal election was the Australian Labor Party’s predictable but nevertheless disgraceful and disgusting response to it.

Anthony Albanese’s “we’re so fucking sorry!” cringeathon tour of the Sunshine State where much of the damage was done late in that campaign still stings with this writer.

On election to the Opposition leadership and with his tail well and truly between his legs and a “whip me and whip me hard” look on his face that Peter Beattie would have been proud of, Albanese applied the conventional political wisdom, saying the people had spoken and their decision had to be accepted, blah, fucking, blah, fucking blah.

He went north and told voters exactly that. He may as well also have told them they had got it right too; Labor had made the mistake of having too many policies and they would be given a damned good reviewing, he declared apologetically.

Even now, I can almost feel the voters nodding agreement after they had retrieved the keys of their petrol and diesel work utes and recreational vehicles from the safety of where they had been buried in the back yard after Labor threatened to take their weekends away.

My argument then was that the perfect storm that was the 2019 election had basically thrown out all the basic rules and niceties of political intercourse. And that included the “youse voters always get it right” spiel from the loser.

Morrison had campaigned on bugger-all policies and on the back of a litany of lies, a farago of fibs about Labor’s policies that made Labor’s Mediscare campaign of recent campaigns look like a push and shove among pre-schoolers. The LNP Labor’s death tax scare campaign at the death alone put Mediscare in its shade.

If I were Albanese, I would have fronted microphones in seats such as Dickson and Flynn and told locals to go fuck themselves with rubber hoses. Take a long hard look at yourselves, you stupid cunts would have helped frame my central message. Something like that.

Okay, I’m from the old “crash through or crash” Whitlam school of politics.

Perhaps Albo could have been a little bit more diplomatic but I saw no great flaw in telling voters, in the nicest way possible, that they had been well and truly conned.

And I wouldn’t have given a rat’s arse if Rupert’s rotten rags tagged that as being the worst of poor losers because Labor deserved to be very, very angry about what happened.

And it didn’t take long to show just how astutely accurate Albanese would have been to take the sore-loser route.

The obscene amount that worker-hating prick Clive Palmer spent on anti-Labor advertising, much of it in the last week, and the mind-blowing amount Morrison and his mob spent of taxpayers’ money on industrial strength, pork-barreling, some of it most likely criminal, before that poll have only been disclosed since May in 2019. Gold-standard rorting continues to be disclosed two years on.

Palmer alone is totally responsible for the shameful reality of Australian politics, moving forward as Julia was wont to say, that no party will ever again take the risk of taking a tranche of policies to the people.

You only have to look at Labor’s reaction to the 2019 loss to know the truth of that.
They cast aside a very logical and sensible policy on axing franking credits faster than trousers get dropped at Schoolies.

And only this week, we’ve heard Albanese drop negative gearing policies taken to two losing elections in a row, and the big one for this ranter, the party’s decision to support the Turnbull/Morrison government’s decision to trash Australia’s traditional progressive and fair income tax system and move a hell of a long way to a flat taxation rate that favours the rich.

Supporting those third-tier tax cuts is a disgusting move from a party that is clearly showing its complete lack of faith in selling a policy to the people. That sort of income from those income tax, franking credit and negative gearing policies alone are exactly what any federal government needs to weather an unexpected storm (anyone for COVID?), or to ensure the ongoing funds needed for doing what’s expected of them. Even perhaps new stuff like fixing kids’ teeth for free.

The sort of stuff a prime minister interested in doing the job and putting Australians’ interests first might do? A silly old concept, I know.

Albanese and his strategists may be right. He might win with some sort of slogan that sums up in a nutshell an overall pitch to voters: Please vote for me because I’m not the lying, lazy, loathsome, self-centred, snake oil-selling, blame-shifting, bullying, worker-hating, privateer-mates-loving, cowardly cur and far-right religious fruitcake that is Scott Morrison.

Albanese and his mob have to be careful though that they don’t make themselves such a small target that they disappear up their own arseholes and totally out of sight and out of the minds of the voters of Australia.