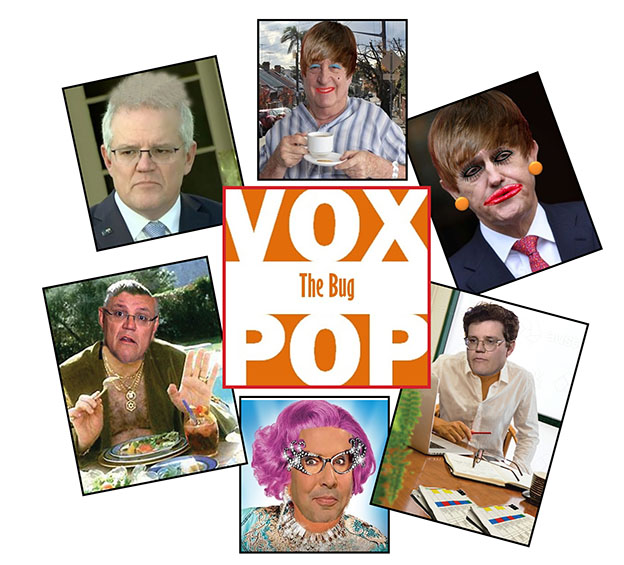 Prime Minister Scott Morrison shocked work colleagues and indeed close friends who have known him most of his life when he openly apologised yesterday for the botched COVID-19 vaccination rollout. “I’ve never, ever, heard him apologise for anything – ever – in all the decades I’ve known him,” a former state and high school chum of the PM told The Bug.

And that got us at Bug HQ to thinking: what are very average Australians making of this new, open, honest and frank national leader.

Ignoring the enormous expense involved, we sent out teams of reporters all over Australia to ask people in the street if this apology can turn around the electoral fortunes of the prime minister and a government now lagging six points behind Labor in Newspoll. The responses were mixed, to say the least.

Gosh, I hope so. Scott Morrison continues to evolve and I still don’t think I’ve got him nailed completely. These hair plugs I’ve had implanted recently cost me a bloody fortune just to keep up with his physical appearance. Besides, I don’t want to end up like Lawrence Mooney once Malcolm Turnbull got rolled. That poor bugger is now employed by Waverley Council and mans the towel-and-beach-umbrella rent booth at Bondi Pavilion.

I’m starting to wonder if some of the reports I’m hearing of Scott Morrison being apologetic have come from people who were actually in the room, or outside The Lodge as it turned out. I’ve seen the transcript and Scott was being very much tongue in cheek, even though he had his arms folded. All he said was that he was sorry to have read internal party polling that has now forced him to say he is sorry. And even before then, he had clearly stated over and over again that he was taking full responsibility for whom he will blame next for the COVID-19 vaccine rollout shemozzle. No, the guy’s a marketing genius so only a fool would count him out.

Bloody hell! What were the chances your voxpop would approach me, the young staffer who did a lot of the groundwork and coloured in the spreadsheets for the community sports grants and the commuter carpark upgrade funds rort? But yes, I’m not at all surprised by the apology. Mr Morrison is capable of completely changing his persona to suit current needs. Maybe I shouldn’t mention this but I know he’s been completely appalled by all the information that has now surfaced about the massive pork-barreling that took place before the 2019 election. Well, I can tell you coloured spreadsheets, countless memos back and forth and final ministerial discretion within individual departments are now totally banned. The Prime Minister is now the only person involved in funding allocations for the massive pork-barreling that’s now under way for the upcoming election and all LNP sitting members and candidates in other seats the government is targeting must all make their requests for funding in person to the prime minister, after hours when Parliament House is largely deserted and even then only by sign language.

An apologist as leader is the last thing this nation needs in its time of grave peril, be it from the coronavirus or those yellow, slanty-eyed, Chinese communists to our north. There must be someone around the traps who could lead the government much better through the strength of his personality, his drive and ambition, his honesty and compassion and his life-long commitment to doing the right thing by Australia. Someone who is as tough as nails and who wouldn’t blink before turning around a leaky boat chockablock with criminal asylum seekers and their children and happily open up on them with the front-mounted machine guns just to send them on their fucking way.

My goodness gracious me …… surely everyone would agree with me that Scott Morrison’s apology makes him look wishy-washy and weak. His father died of shame and to make it up to him, Scott Morrison should be taken out to sea and thrown overboard in a chaff bag.

No, with that stupid, out-of-character apology, the man’s finished. There surely must be someone waiting in the wings that could reunite an angry and fractured nation. Has Australia ever had a Jewish prime minister?

I still find it hard to feel sorry for Scott Morrison. The Liberal Party should never have got rid of Malcolm Turnbull. With his style, charisma and charm, he would have won the 2019 federal election in a landslide!

The apology was a masterpiece of political manipulation. Scott Morrison won the last election almost single-handedly and he’ll do it again.