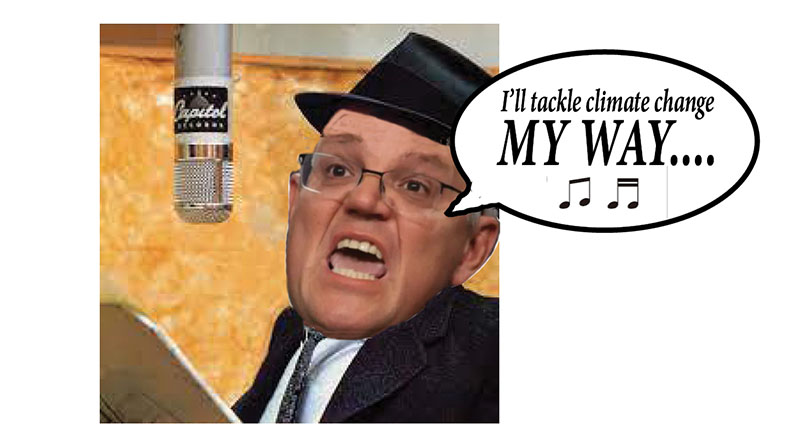 Your ranter-in-residence reached the conclusion a long time ago that there are two Scott Morrisons out there and the one I’ve kept an eye on is a totally different beast to the one the mainstream media are watching.

Sort of a sliding bores situation, maybe? And this opinion has been reinforced overnight by MSM reaction to the return to the Nationals leadership and Deputy Prime Ministership by Barnaby “I’m a changed man but cop the legs on that shiela; fuck, I’d like to give her one!” Joyce.

Almost to a man and women, our political commentariat have formed the view that a likely hardline opposition by Joyce to a net zero emissions target by 2050 will bring problems for their version of Morrison.

I simply don’t see it. Morrison has as many coal huggers in his own ranks as the Nationals have and while the Beetrooter’s return holds many risks for the PM, a well-recognised opposition to this climate-change nonsense across Coalition ranks is not one of them. Well, it shouldn’t have been; more on that later.

And the reason for this MSM belief that trouble lies ahead for Morrison? I’ve never spotted it but their Morrison is moving ever so closer to that zero target. True, their assessment of the speed of that drift varies but it’s real, folks! Australia is going to join the rest of the world and take down the scourge of climate change by not using all the natural coal resources available to it.

This nonsense was started by Peter Hartcher months ago when he misinterpreted some wibbly, wobbly words from the great man that included “preferably” to declare basically that the Morrison he sees has moved to the centre, taken the wind out of Labor’s sails, and is controlling the political debate from a winning position.

Hartcher was so gushing it would not have surprised if the Australian Electoral Commission had then come out immediately and put Anthony Albanese and Labor out of their misery by cancelling the next federal election and simply awarding the Father of the Nation another three years in office. Oh, fuck it. Have six!

Absolute tripe of course that sounded like LNP talking points. Risible rubbish from someone who probably knows better, making his essay back then all the more shameful.

But his colleagues happily overnight continued this theme after Joyce’s Akubra-less coup. Chris Uhlmann on Nine News, Andrew Probyn on ABC 7pm news and the ABC News Breakfast Canberra tyro de jour all talked about the problems ahead for the Morrison they see as he “moves”, “drifts” – whatever! – towards the rest of the world’s efforts to save the planet.

These interpretations of where Morrison is heading beggar belief for a number of reasons, including the assumption we can safely make that none of these MSM political wunderkids listened to the PM’s recent speech in Perth before he jetted off to drink some real ales at various pubs in Cornwell.

Dissect his words with any degree of commonsense and logic and Morrison has made it fairly clear. Preferably so. He had hoped to go to the Glasgow climate change conference in early November still very much an outsider but at least he’d be there to enjoy some pints and visit a cemetery or two.

He would have done this with an election victory under his belt around October by following the template from his 2019 victory; keep the coal electorates on side and push back on his lardarse after the daily photo op and let those very same MSM political geniuses tear strips off Albanese and Labor over the cost of any zero-net-emissions target by whatever year.

Things, however, have not gone according to plan. My version of Morrison has lost a fair bit of bark over recent months. The vaccine rollout is turning out to be a disaster, the latest Nine newspapers poll has reinforced that his budget fell flatter than a Kitty Flanagan comedy routine and his election plans are on hold.

Even his totally botched vaccine rollout will come to an end, and unless Morrison and his Defence Minister Peter Dutton can provoke all-out war with China by the early months of the New Year, sparking some form of misplaced patriotic fervour before the inevitable, humiliating surrender, the focus for the next poll will drift more and more to the government’s overall performance over the past three years and climate-change inaction will just be one of his many problems.

By then, he might desperately be in need of another miracle win from Jesus Christ, his Lord and Master.