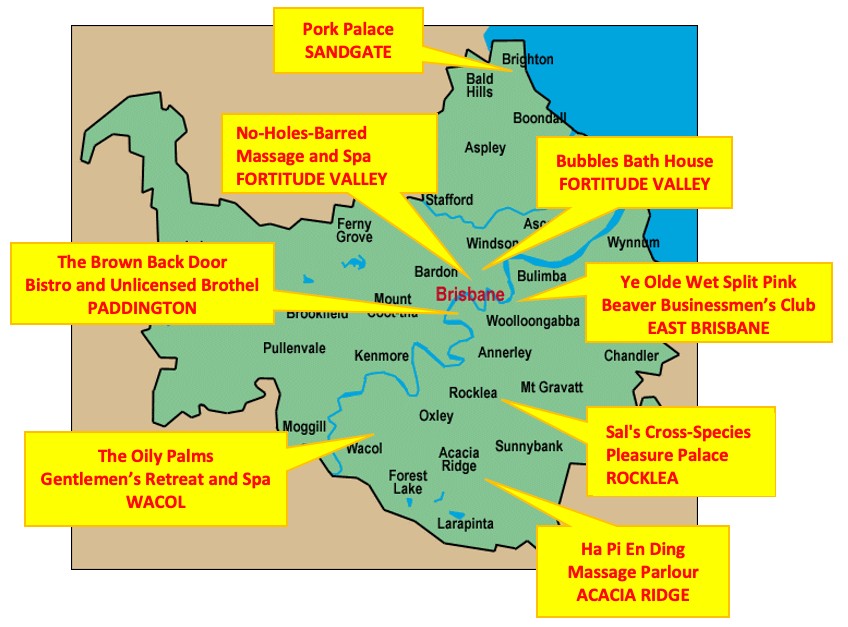 The three players are believed to have made contact with an unknown number of people while positive with COVID-19 during visits last Sunday evening and most of Monday to venues described by a Queensland Health spokesperson as “late-night and all-night entertainment and recreational venues”.

Authorities said the players – end grinder John “Huge Dick” Smith, backfield grouter Peter “Massive Genitalia” Jones, and front-right wedger Dick “No Nickname” Bigg – embarked on visits to a range of establishments across Brisbane following their 1204.77.03 to 1935.87.4 defeat of the Fremantle Fistulas in the JDG.

In a bid to encourage others to come forward to be tested Queensland Health has released a map of just some of the venues known to have been visited by the players. (main picture)

“We have called in the police because of the potentially vast number of people who may have come into contact with the three Bolts,” a QH spokesperson said.

“We have determined that in most cases the contact was very close and best described as ‘intimate’.

“We have determined that the contact did not comply with social distancing requirements.

“That’s despite all three Bolts claiming that their, shall we say, physical attributes meant that they were able to socially distance to a large extent from the people they had, shall we say, encountered at these various establishments.”

When contacted by phone, CEO of the Brisbane Bolts, Terry Verandah, denied that he was also at risk of testing positive because he had  accompanied the three players on their celebratory visits.

“I don’t give a syphilitic pig’s snatch what you pus-oozing reptiles in the media think,” he said.

“I don’t have to tell a dung beetle’s pubic lice like you what I do in my private life or who I might hit the town with and who or what we get up to and how many times.

“If you were in reach right now I’d do that myself, but send it up your tucker chute sideways,” he said before ending the call.

Senior coach of the Brisbane Bolts, Jack Saunders, dismissed concerns about the positive COVID-19 tests and the possibility of further widespread infections.

He also denied the visits by the players indicated he should impose a more disciplined approach to the after-hours activities of players during the ongoing pandemic.

“It was just a bit of high-jinks,” he said. “Just some good natured horseplay.”

A spokesperson for the club’s honorary solicitor Dicky Shearman said he was prepared to finally respond to our many calls but “the meter will be ticking and you’d better be cashed up”.

Disclaimer: The Bug has been a long-term supporter of the Brisbane Bolts.