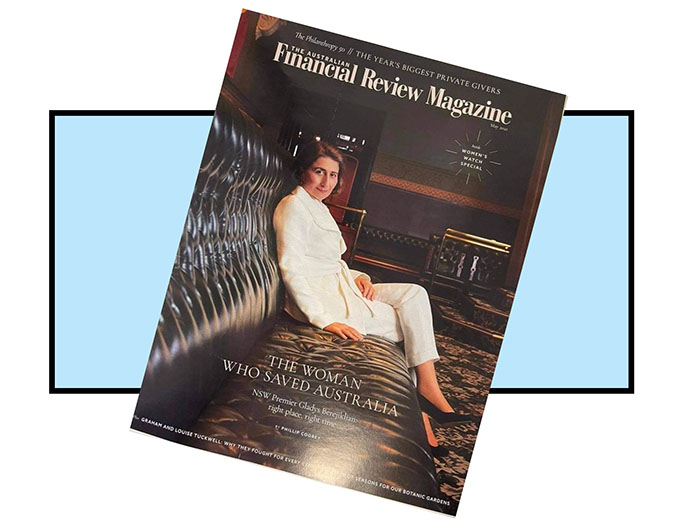 Well, the Costelloisation of the former Fairfax mastheads is complete.

It happened quicker than anyone at The Bug’s Media Glass House thought possible but it’s been well and truly confirmed with this vomitous piece by Phillip “Sing me the old, old Tory” Coorey in the Australian Financial Review.

The MGH can almost hear senior layout subs at Newcorpse nodding their heads in total approval at the AFR’s front-cover treatment of Coorey’s colour piece on NSW Premier Gladys Berejiklian (above).

Gladys Berejiklian? The woman who secretly fuc….. you know what? We could go on for quite a while listing her missteps and mistakes over recent times but why bother?

The heading is risible and whoever drummed it up should hang their head in shame. Along with Coorey who squeezed out the dribble inside.

The MGH doesn’t really care what the two of you call yourselves but just don’t say you’re journalists.

Look, we all know that the AFR was the rightwing rag of the old Fairfax mastheads.

But if the AFR can come up with this sycophantic nonsense now, just imagine what all three mastheads are going to dredge up when Berejiklian is actually up for re-election on March 25, 2023.

On top of some of the rightwing rubbish columnists have been sprouting of late at the other two Nine Entertainment mastheads, The Sydney Morning Herald and The Sun-Herald, Nine Entertainment chair Peter Costello must be mightily happy indeed.

Editor’s note: With upload deadline approaching, The Bug’s graphics hub on mezzanine level 2a did not have time to put a nice deep Liberal blue background on the image above.

Back in your box, you upstarts!

As if stung into action by Nine Entertainment’s brave bid (outlined above) to be the nation’s leading far-right-wing loony, Liberal leader arselicker media group, Newscorpse has returned fire with a breathtaking piece of sycophantic idolatry.

Those at the AFR still backslapping themselves over Phillip Coorey’s word fuckfest with Our Glad quite possibly missed the Dirty Digger’s response barely a day later: a murderous volley of fire across the nation’s Newscorpse Saturday metrofictional magazines lauding the Messiah from the Shire and everything he goes down on his knees and sobs and prays for Jesus Christ his Lord and Master to make right with the world, a vote-winning vision his lovely wife Jenny has shared with the world before.

Gee, we hope that’s not an attack on her. We’d hate to disappoint Jacqueline Maley.

That image of God’s bestie graced the cover of the various Newscorpe Saturday magazines around the nation and the MGH reckons no-one summed up what most Australians would have thought of the whole exercise than a Tweeterer by the name of Sleeping Giants Oz.

The MGH passes on its condolences to the millions of athiests, agnostics, other faiths and real Christians who don’t believe their God can give them a damn good tonguing and make them fall backwards if touched.

We sincerely hope they had a chuck bucket ready if they made the mistake of reading just one word of this untreated arse gravy*!