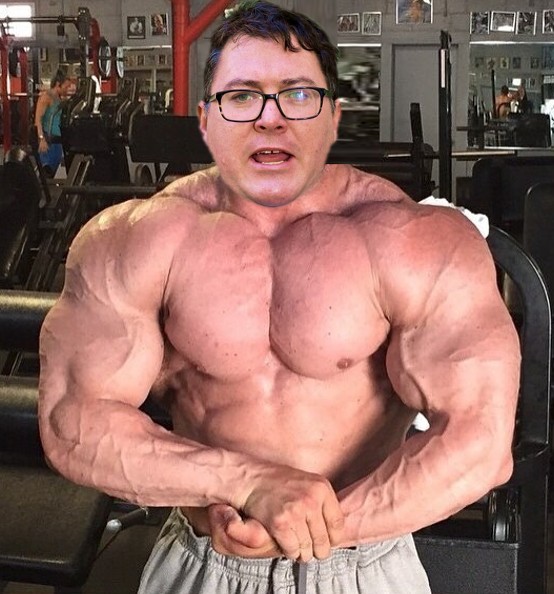 Queensland federal MP George Christensen has explained the reasons behind his snap decision to quit politics at the next election.

The Liberal National Party politician said he was walking away from his North Queensland seat of Dawson based on Mackay because he feared two big secrets about him could be made public.

“The first secret is that all those trips I’ve made back and forth to Manila in the Philippines had nothing, or more correctly, had little to do with visiting the woman I met there and who has subsequently married me,” Mr Christensen told The Bug in an exclusive interview.

“The truth is that I was going there to visit faith healers who have given me the muscular body that I’ve always sought. (main picture)

“Until I’ve revealed it to The Bug, people haven’t noticed the transformation because all the muscle I’ve put on has replaced fat, so my body has stayed the same size.

“You just can’t see how rock hard and sensational I look under my suit until I shed my clothes.”

Mr Christensen said the other big secret he had feared might gain wide currency if he stayed in parliament involved his vote share at the 2019 poll.

“Ever since I was returned in Dawson at the last poll, know-nothing commentators in the Canberra bubble have repeatedly referenced the ‘big swing’ I achieved,” he said.

“That’s bullshit, although people supposedly ‘in the know’ keep repeating it.”

Mr Christensen said a column this week in the Australian Financial Review by the ABC’s Laura Tingle was typical. In she stated: “Christensen is the Liberal National Party backbencher from the Queensland seat of Dawson with a penchant for colourful views and travel to the Philippines. which has made him a national figure for not necessarily the right reasons, but who locally managed to pull off a big swing to him at the last election.”

“Even I admit that’s crap,” Mr Christensen said. “The swing to me on primary votes was 0.32% and I received under 43% of the vote.

“That’s a healthy share, but it was the preferences of a range of very conservative party candidates including One Nation, Katter’s Australian Party, Clive Palmer’s United Australia Party, and the DLP for fuck’s sake, that put me over the line ahead of Labor with a 2PP of 65% and a ‘swing’ of more than 11%.

“The reality is I certainly wasn’t the first choice for a huge slice of voters, but if you listen to Laura Tingle and others you’d think I got the 11% swing on primary votes.

“Now I admit there are some journos who’ve actually done the work and looked at the freely available voting figures on the AEC website.

“But most of them haven’t bothered to get off their fat, well-paid arses to inform themselves.

“And if anyone knows about people who don’t get off their fat, well-paid arses to inform themselves, it’s me,” Mr Christensen said.