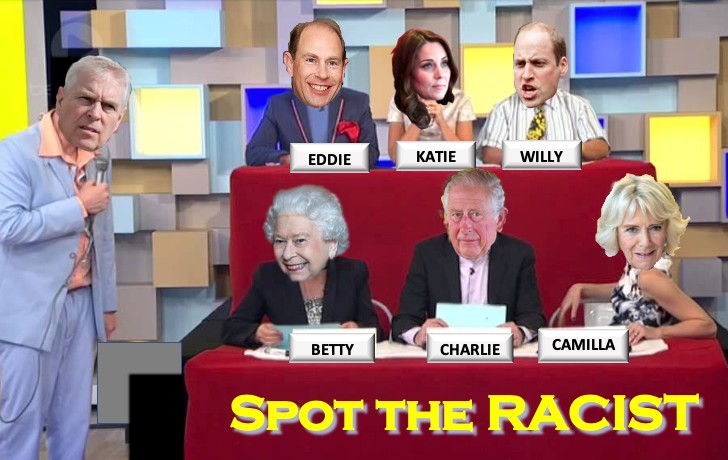 LONDON: The BBC is shooting trial episodes of a new panel show in a bold bid to capitalise on allegations of racism within the royal family raised by the Duke and Duchess of Sussex.

Pilot episodes of Spot the Racist have been rushed into production with the show based around members of the royal family being asked questions by a host to determine who was the most racist. (main picture)

“The royals readily agreed to appear and obviously see it as an opportunity to repair their public image while fighting back at the charges levelled against them by the Sussexes,” a BBC spokesperson said.

“Sadly for us the Duke of Edinburgh is too ill at present to take part in the pilot episodes but may appear if a series is commissioned.

“We were also surprised that Prince Andrew agreed to act as host for the new show.

“Andrew said he enjoyed his role in It’s A Royal Knockout all those years ago, plus he still had an old suit of the late Jimmy Savile which he has insisted on wearing as host in a sort of tribute to the old trouper.”

SYDNEY: Australia’s domestic airlines have begun doubling their air fares to tourist destinations in preparation for the half-priced fares to start on April 1 under the federal government’s $1.2 billion scheme to boost tourism.

MELBOURNE: The on-camera talent on the ABC’s popular News Breakfast program have voted to stop using “good stuff” from now on.

The 6am show will now finish at 8am, an hour earlier than normal.

PERTH: State Opposition Leader Zak Kirkup has surprised some with his overnight announcement that if he loses his seat at Saturday’s election, he will no longer be in politics.