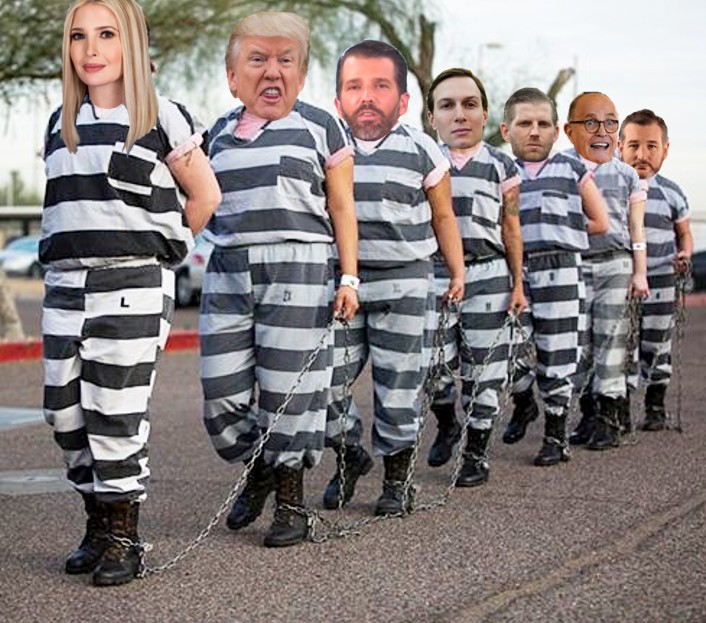 WASHINGTON DC: While continuing to publicly deny he lost the November 2020 presidential election, Donald Trump is quietly preparing to leave the White House next week to start a new chapter in his life.

As part of his preparations he and his closest political supporters have been spied in and around the White House grounds staging confidential rehearsals for their possible new way of life (main picture).

White House sources said Mr Trump had been convinced by a group of senior aides to begin preparing for the “new realities” of a post-presidential life.

“Following the Capitol insurrection the President’s most senior advisers assessed the likely future trajectory of his political career and decided to begin getting him accustomed to the challenges that will present,” the source said.

“They decided that Mr Trump and his most ardent political supporters should be brought together to practise – or practice, seeing that I’m American – the key skills they’ll need in coming years.

“That has included marching in lock step, banging a tin cup on steel bars, and how to hold tight to soap in a shower if they can’t get their hands on soap on a rope.

“His aides initially found it difficult to get through to the President the need for him to start preparing for what is in store for him after Inauguration Day.

“For example, when they explained his likely future living arrangements he wanted to know where in Florida the city of Incarceration was before veering off into discussing plans for his presidential library.

“But he did seem to get a better understanding of the reality facing him when Rudy Giuliani suggested the library be stocked with books with files and guns hidden in them.

“We think he gets the message now because he has again called for the White House counsel to brief him on the possibility of him pardoning himself,” the source said.