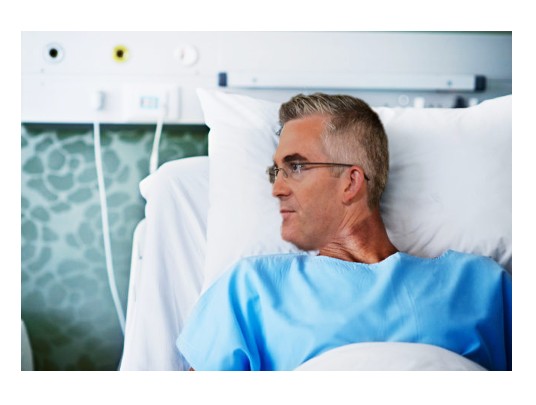 A program staffer who witnessed the incident at the ABC’s Southbank studios said it was clear to anyone present that something was wrong with Mr Speers.

“He sort of collapsed as soon as the studio lights dimmed, but every time we asked him what was wrong, he’d interrupt us,” the staffer said.

“He really worked himself up. It was as if he were suffering from something uncontrollable like Tourette’s syndrome, but instead of shouting out obscenities or bizarre single words or phrases, David just kept interrupting anyone who opened their mouth.

“It was as if he’d bottled up all these interruptions and had to get them out.

“He was going at it so hard that he eventually collapsed from sheer exhaustion and began drifting in and out of consciousness.

“But even then he managed to interrupt the paramedics when they arrived and began asking him about his symptoms and condition.”

An ABC spokesperson said Mr Speers was rushed to Royal Melbourne Hospital where he was admitted and underwent a series of tests.

“Doctors have confirmed that David Speers sustained an attack of a very rare condition known as AID, or acute interruption deprivation,” the spokesperson said.

“A look back at yesterday’s episode of Insiders shows the cause of the problem.

“David was confronted with a guest panel of three female journalists including the ABC’s indigenous affairs reporter, and two federal MPs as guest interviewees who were both indigenous Australians.

“It was clear that David was aware he should curb his usual practice of interrupting guests as soon as they start talking, especially in a week when Prime Minister Morrison was attacked for interrupting an answer by one of his female ministers responding to a question about toxic male behaviour.

“In fact if you look back at yesterday’s show you’ll see that David allows some of the panellists to speak for up to three minutes or more without interruption. That’s unheard of for him.

“Unfortunately all the effort he put into bottling up his natural instinct to interrupt at the drop of a hat caused this attack.

“David remains under care in hospital where his condition is listed as critical. But that’s normal, so he should be out soon,” the spokesperson said.