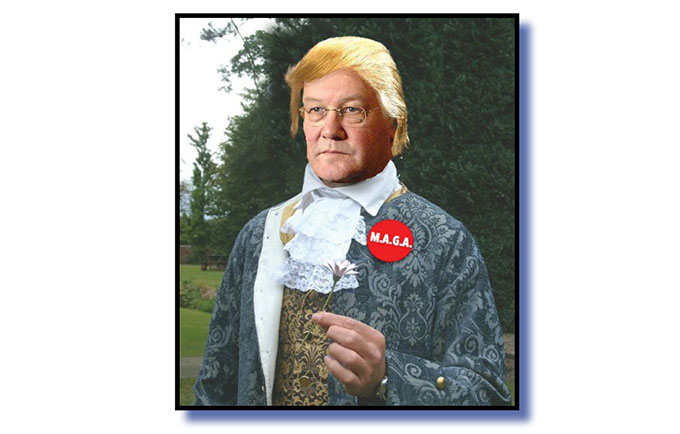 Lord Downer of Adelaide Hills has moved to correct a national newspaper report about his alleged support of defeated US President Donald Trump.

His Lordship called members of the media together at his Adelaide Hills family seat Pout House to issue a personal statement to set straight the public record.

With their oiled torsos glistening in the sun, the stable hands laid His Lordship on a velour chaise longue from which he made his statement.

“I am as all Australians know, first and foremost a gentleman, nay a nobleman,” His Lordship began.

“It therefore pains me to have to enter the public arena and to issue a statement which of necessity requires me to deal with ruffians and ne’er-do-wells such as members of the press.”

Pausing for several moments while pressing a kerchief to his quivering lips, His Lordship then launched into an attack on the national newspaper the Australian Financial Review.

“In the week prior to the so-called elections in the United States, that grubby far-left – nay, communist – newspaper declared that I was a supporter of the current President, Donald J Trump.

“This noisome newssheet, this wretched rag, wrote that I had said if were an American and could vote then I would ‘vote through gritted teeth’ for Mr Trump.

“This assertion demands to be clarified. I never said anything to suggest that I would grit my teeth and vote for Mr Trump.

“To be absolutely clear, I said that I would have one of my manservants grit his teeth on my behalf and then have him vote for Mr Trump.

“A nobleman does not lower himself to vote which in itself is an alien concept to members of the gentry like me.

As Lord Downer summoned his stable hands, threw his arms around the neck of one and ordered them to carry him back to Pout House, a reporter queried the presence on His Lordship’s tunic of what appeared to be a Make America Great Again badge.

“It is nothing of the sort, my good fellow,” he continued. “It is part of my own personal campaign to Make Adelaide Genteel Again.

“Gadzooks, man, I am sick and tired of having to mix and mingle with the demi-monde and all kinds of ninnyhammers, hoydens and light-skirts every time my curricle proceeds down King William Street,” His Lordship said before ordering his stable hands to tighten their grip on him and queried aloud whether their jodhpurs may be disposed of so as not to slow  their progress to Pout House.