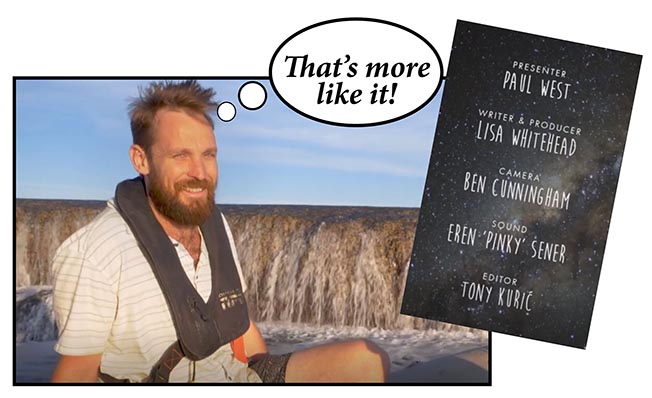 Unless the Glass House needs to go to one of those optometry franchises known for saving specs, it’s pretty sure that guest Back Roads presenter Paul West was shamefully shunned in the closing credits for this week’s episode on ABC TV.

West did a very competent job putting together a very interesting and visually spectacular visit to the Dampier Peninsular in Western Australia and as the credits rolled, right up the top was “Presenter Heather Ewart” also known as Mrs Barrie Cassidy, or to be politically correct, the partner of Mr Heather Ewart.

We thought: now, there’s a harmless little mistake we can make fun of, if for no other reason than to remind the good folk of Australia just how hard it is for Aunty to do her job properly with all the budget cuts the federal government assures us it hasn’t made to the national broadcaster since coming to power in 2013.

So what happened when we went onto iview – you, know that free streaming service that Rupert Murdoch hates with a passion when all he’s trying to do is make a fair bob on an even playing field putting out quality, balanced, professional news across various print and online platforms – to get the image of the oversight?

There it was! Presenter Paul West! What the!!!!

If our eyes did not originally deceive us, it’s to the ABC’s credit that with slashed staff numbers and everyone working so hard, it picked up the mistake and fixed it.

If those credits always said “Presenter Paul West”, we at the Glass House will have to admit we’re starting to see what we want to see to fill a column that can be a rather hungry beast! And that’s not a good habit to get into when you’re poking fun at media mistakes.

But what we can have a legitimate dig at, with no fear of challenge, is the shameful way various news outlets covered the release from a Sydney prison of a “paedophile priest” after serving serious jail time for fiddling two choirboys.

We know we can sometimes get just a little pedantic in picking up errors in the media’s use of English but “paedophile priest”, just like “criminal lawyer” is a shocking case of tautology and the reporters who have used it should face a heavy on-the-spot fine from the word police.

Let’s end with a tweet early Wednesday morning from Tony Koch, former News Ltd journalist for 32 years, a five-time Walkley Award winner and who was inducted into the Australian Media Hall of Fame in 2018.