Award-winning* journalist Don Gordon-Brown proudly presents another sporadic and randomly selected chapter from his probably soon-never-to-be-released memoir of his time at Queensland Agricultural College, Lawes, in the Lockyer Valley. 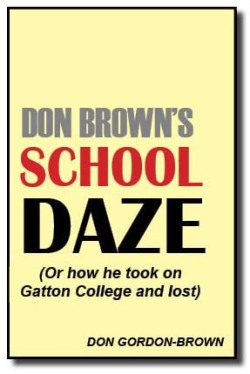 Serial killers, murderers and even a Deputy Prime Minister passed through Gatton College, as it was commonly know, but Don proudly suspects he remains to this day the only student to be expelled from the campus for life.

Chapter 6: The troubles with Mike Hunt

I got into trouble on my very first day at Queensland Agricultural College, Lawes – aka Gatton College –  in early 1966 and I blame it all on having as my roommate a strapping young chap named Michael Hunt.

Anyone remember that famous scene from that US breakthrough teen sex flick, Porky’s, made 16 years after 1966?

The young waitress at the diner is asked over the phone to see if a certain lad is present in the eatery.

Well, while some of this memoir might be slightly embellished if never entirely made up, I did have the following discussion with my parents on the day I enrolled at Gatton College.

“Mum and dad,” I said after they wandered up to room 145 on Shelton dormitory after I had stored all my college-branded work clothing, gum boots etc, etc, in my cupboard, “I’d like you to meet my roommate Mike Hunt… I mean, Michael….Michael Hunt.”

I think I got away with it.

In the months that followed, I got to meet Mike… I mean Michael Hunt’s lovely parents, Rex and Joyce who ran a dairy farm inland from the Sunshine Coast off the Eumundi.-Kennilworth Road.

Why they didn’t call their oldest son Matthew or McEwan or some other bloody thing remains a mystery to me to this day. Or Rex! Seeing that was Michael’s middle name. Just switch things around to avoid that first-day embarrassment? Would it have been that hard?

Each morning, he would stand by his bed naked and cup his more than adequately sized plums in his hands and gently massage them upwards to the sides of his equally impressive cock until he was doing a damn fine impersonation of Dumbo the elephant.

Remember, this is also decades before Puppetry of the Penis became a hit stage show.

From where I looked, pretending to be – or more correctly wishing I was – still asleep, Mike … Michael…. more than adequately acquitted himself in the meat and two veg department so I couldn’t really be critical of his obvious devotion to his wedding tackle.

I might have joined in this morning ritual if I’d been half the man he was.

But I never worked out what came first; did he love playing with his junk because it clearly deserved to be so honoured for its dimensions, or did his junk become the size it was because he played with it all the time?

Many questions were left unanswered when college and I parted ways permanently some five years later, and that was one of them.