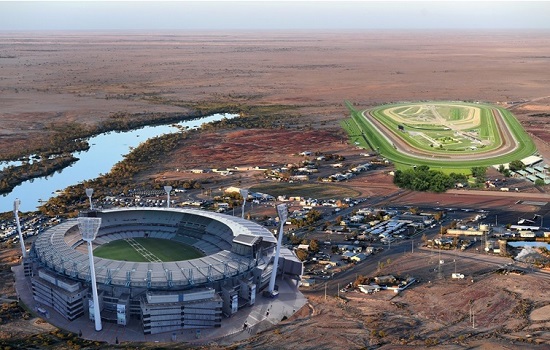 Queensland Premier Annastacia Palaszczuk is now almost guaranteed to win the coming state election as she prepares to announce that she has stolen a march on Victoria by snaring the rights to host two of the nation’s biggest sporting events this year.

The Bug understands that Ms Palaszczuk will today reveal that the iconic town of Birdsville in far-west Queensland will host both the 2020 Melbourne Cup and the 2020 AFL Grand Final as the Victorian capital continues to reel from the COVID-19 virus.

The Bug understands the two major events — expected to draw massive crowds — will straddle the election date with the grand final being held under lights on Friday 30 October and the Melbourne Cup being held on its usual first Tuesday in November just days after the Queensland poll.

Ms Palasczzuk is expected to also announce a statewide public holiday for the running of the Melbourne Cup on 3 November, but only if her government is re-elected.

“Labor now can’t lose on 31 October,” a Brisbane-based News Corp political reporter told The Bug on condition of anonymity because he would be filing a story saying exactly the opposite. “Sports-mad Queenslanders will fall over themselves to vote Labor the day after their state hosts the AFL Grand Final and just days before they can look forward to a public holiday and a punt on the ‘race that stops the nation’.

“If the Brisbane Lions — currently ranking second on the ladder behind Port Adelaide — just make it to the grand final or even win, then we can look forward to a massive landslide for Labor not seen since the LNP won 78 seats out of 89 in 2012.

“This is sheer bloody political brilliance of the kind Australia has never seen before. Of course I’ll be writing exactly the opposite, you understand.”

Purpose-built replicas of the Melbourne Cricket Ground and Flemington Racecourse are nearing completion at Birdsville after being hastily designed and constructed in the past few weeks in a top-secret operation agreed to between the Palaszczuk Government and the AFL and Victoria Racing Club.

It’s understood that Birdsville was chosen to help adhere to social distancing requirements as well as its track record in hosting its own annual race day which sees the town’s tiny population of just under 120 swell by several thousand people for the popular weekend.

The 2020 Birdsville Races were set to run on the weekend of 3-4 September but were cancelled in May this year, allegedly because of the state’s efforts to fight the COVID-19 pandemic. But government sources said the real reason was the fact that plans were even then under way to snare the Melbourne Cup for the town and construction of the replica Flemington track complex and MCG needed to start.

“Don’t think this is the end of the big announcements that will put Labor in a likely unbeatable position come election day,” a senior government source said.

“There’s lots of video conferences going on at the moment between the Premier’s office and major sporting organisations both here and overseas.

“You shouldn’t be surprised if a few more announcements are made soon about Queensland hosting some very, very big events this year — all of them with an eye to the election, of course.

“I can’t say too much right now but the Premier is known to be brushing up on her high-school French and has been seen being fitted for a yellow jersey for a possibly imminent media conference.”