Well, they said it couldn’t be done!

That it was impossible for The Courier-Mail to be seen as even a greater public relations outlet for right-wing parties and governments than it has been in recent years – but today it’s plumbed new depths.

Perhaps determined to shake off once and for all any highly unlikely traces of a long-lost reputation as a professional and balanced newspaper with journalistic integrity, Brisbane’s monopoly metropolitan daily managed to keep one of the biggest news story for yonks off the front page.

We at The Bug think news that the federal government’s much vaunted COVID-19 $130 billion jobkeeper scheme would only cost $70 billion was pretty much “HOLD THE PRESSES!” stuff. “REBUILD PAGE ONE!”

The West Australian knew instinctively it was the day’s splash, and matched it with an excellent heading YOU HAD ONE JOBKEEPER.

So, why did the Courier stick this story inside? It was on page four of the print edition we spied early this morning. A little later, the paper’s editor Chris Jones on Twitter said it had run on page 2. We’re yet to confirm this but really? Page 2? Who reads that? Maybe page 2 of a limited late city run too?

What is true is that at 12.30pm today, (Friday) if the paper’s online edition made any mention of the unprecedented stuff-up, it was harder to find than a discarded potato chip on Bondi Beach. 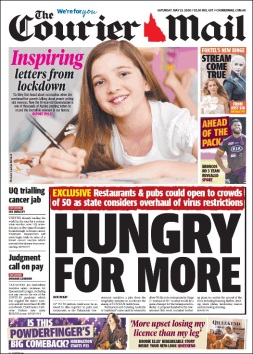 And what was the page 1 splash? Pubs and restaurants could be allowed more patrons soon! That’s not quite as stale as the kegs of beer sitting in their coldrooms but still only a variation of what has already been published.

And, seriously? JobKeeper costs slashed by $60b? It almost sounds as if Smoky and Frydo were deliberately doing us all a favour.

So why the deliberate downplay on both platforms of a story we all know would have been on page one for some days in a row if a Labor government had been in  power and overseeing such a monumental “administrative” stuff-up?

Too damaging to the federal Liberal/National Party government? Makes a mockery of their self-proclaimed image as better economic managers?

Important, maybe, to keep the damage to a minimum with the Queensland state election now less than six months away?

Did the call come through from New York?

Whatever the reason, it’s disgraceful news-value selection by the powers-that-be up at Campbell Street in a building The Bug has affectionately called the LNP’s Bowen Hills branch for some years now.