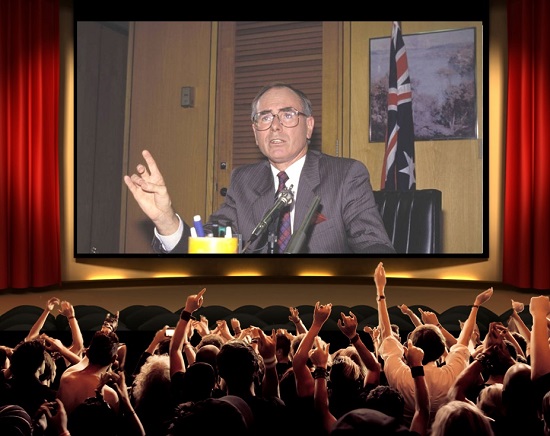 Dozens of Institute of Public Affairs executive staff members have been fined $1500 each for breaching tough Victorian COVID-19 social-distancing laws.

Victorian police swooped on the Melbourne headquarters of the conservative policy think-tank known as The Voice of Freedom late yesterday (above) and caught the staffers crammed into a large auditorium where they were watching footage of John Howard’s 1996 federal election victory speech.

“Our top-tier people had gotten together for a policy brainstorming session and watching John claim victory in 1996 always provides amazing incentive and motivation to the lads before they get down to work,” Ms Albrechtsen said.

“Maybe we should have shown the film in two or three sessions to a better spaced audience but that would have lessened the impact of all those voices raised at the film’s end with the IPA’s chant : ‘We will determine the policy of the Australian government and the manner in which it is implemented.’

“If you’ve never heard this special war cry of ours at these sessions or at our conferences, it really is quite moving.”

Ms Albrechtsen said the heavy-handedness of the Victorian police had meant the policy brainstorming session would now have to be rescheduled.

“It had intended to look at new ways of ensuring the Australian Broadcasting Corporation is put into private hands where it belongs as soon as possible,” she said.

“The session was also to consider our policy to scrap compulsory superannuation so employers can pocket the cash, plus confirm our stand that in crises like the COVD-19 emergency it’s important to enable big corporations to shed staff who really should have put their own money away for a rainy day instead of being paid any Jobseeker or Jobkeeper allowance from taxpayer funds which should be reserved for propping up big business.

“And it wanted to continue formulating an excellent Dole out Unpaid and Permanent Internships Scheme that must be rolled out across Australian workplaces if we want to get our economy moving again post COVID-19.

“Business owners must have the freedom not to pay staff.”