The Glasshouse has explained the art of headline writing before so here’s a quick refresh.

Most subs are capable of putting a competent, solid and relevant heading on most stories. We call them “standard”. Sometimes they try for  “clever” or, with an eye to the annual three-heading Walkley,  even “brilliant”.

Perhaps it’s the modern world of overworked subs, not-trained-well-enough subs or no subs at all, but there are more headings appearing now that by-pass “clever”, fail dismally at “brilliant” and go straight to “too clever by half”.

Some make the “really fucking awful” or “what on earth were they thinking” categories, such as the Brisbane Courier-Mail heading Glasshouse featured recently (right). Someone up at Bowen Hills was chinaring too hard.

To help your understanding of these categories, here are Herald-Sun headings from two very different categories.

The paper’s splash just the other day (below left) is clever. One Small Step for Man from 1969 becomes ONE SMALL STEP FOR DAN. It also makes sense and is entirely relevant. 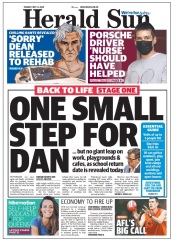 Whoever wrote it should stick it in an electronic folder and work on the other two for a Walkley nomination.

Whoever came up with IT’S DAN-ARCHY OUT THERE (below right) need not bother.

It’s in a Newscorpse rag that is obviously obsessed with bringing down Dan Andrews and Victorian Labor so the sub might get a pat on the back but really? DAN-ARCHY? 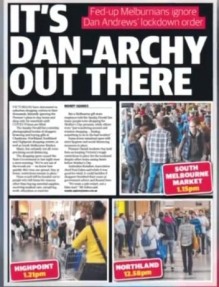 Did the sub really have to stress the DAN link? It makes it easier to read the heading wrongly. Readers would have got it with DANARCHY.

Still complete shit though and a worthy addition to either the “really fucking awful” or “what on earth were they thinking” categories.

Now, dear Buggers. Here’s one for you to categorise. We have faith you’ll get it right.

For the past few days we have shown some examples of appalling and tortured plays on words in headlines from Brisbane’s Courier-Mail.

Yet still they come, as shown by Tuesday’s story on the demise of former deputy premier Jackie Trad (pictured).

Our simple ask to those responsible? Please stop it. You’re only embarrassing yourself. And showing your shameful political leanings. 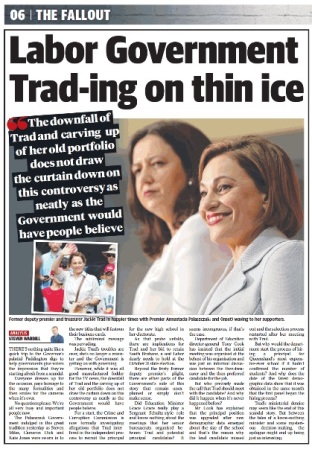 Respected journalism elder, former metropolitan daily editor and long-term popular newspaper columnist Terry Sweetman has come up with what on the surface is a very big call.

Terry on Twitter on Sunday wrote: “This, I believe, is the most offensive, insulting, stupid thing I have ever read (and that’s just the headline).”

Here’s the subject of his bile and we at The Bug think he’s on very solid ground.

We understand that Gerard spews out his right-wing dribble with nary a blush, as if he’s never heard Mathias Cormann say before the last election that suppressing wages was deliberate government policy, or has never read the solid research that showed that cutting those weekend penalty rates for hospitality and other workers did not result in extra jobs, as promised. We could go on … and on – like Gerard.

Seriously, for his own safety, isn’t it time we all worked together to have Gerard sectioned?