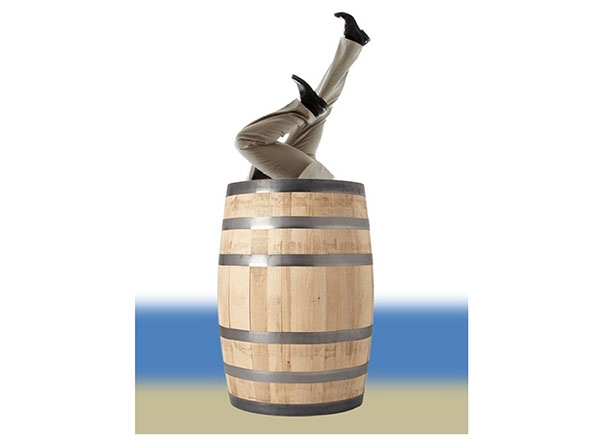 Tedious right-wing pontificator Gerard Henderson writes a regular “media watch” column for the online version of The Australian where, in compliance with that outlet’s editorial policy based on its proprietor’s commercial self-interest, he regularly rails against our national broadcaster the ABC.

His writings, or rantings more aptly, usually take the form of attacks on the ABC’s supposed left-wing bias while willfully ignoring the wrongdoings of his own paymaster, News Corp Australia.

This week’s offering suggests Henderson (main picture) went out and found a barrel and set about vigorously scraping the bottom of it.

He attacked Victorian Premier Daniel Andrews for having the hide to publicly thank and congratulate the ABC for the free educational programming it has been providing during the COVID1- pandemic emergency which has put schools off limits to most children.

It seems Mr Daniels — described by Henderson as a paid-up member of the ABC Mutual Admiration Society — had the gall to declare: “From our best days to our worst, the ABC has always been there for Victorians. And now, they’re supporting students to learn from home by making thousands of resources available online and on TV – for free.”

This brought into play all of Henderson’s critical thinking skills which led him to pen the following devastating analysis rebutting the kindly words of the Premier: “Turn it up. The ABC, which was founded in 1932, was not there in (i) 1851 (when on Black Thursday Victoria had its worst ever bushfires and a quarter of its land was burnt), (ii) 1878 when bushranger Ned Kelly murdered three Victorian policemen, (iii) the First World War of 1914-1918, (iv) the Spanish flu pandemic of 1918-1919 and (v) the beginning of the Great Depression in 1929. Somehow Victoria got through all this without the ABC.”

For good measure Henderson added that far from being free, we pay for the ABC through our taxes.

What a mind. I still can’t believe we are being denied Henderson’s insights by the ABC Insiders weekly chat show where he routinely did a great job as straight man to that genuinely informed and informative non-straight man David Marr.

She would have liked to have seen an increase?

We believe this one falls into the “oops” category. A pointer to an online story on The Australian website (below) told readers about a man taking legal action against NSW Police and his wife for being wrongfully accused of raping her.

The pointer was accompanied on the website’s front page by a picture of a man looking very respectable in a business suit and spectacles.

Not until readers clicked through to the actual story did they discover the man pictured was the lawyer taking the action on behalf of his client, not the wrongfully accused himself who is seeking damages for malicious prosecution after he was acquitted of the rape charges which he claimed were originally based on false, incomplete, and ignored evidence.

Now we are aware that because of the nature of the original charges it may not be possible to identify the man himself but we suggest that using a picture of another man without explanation instead of maybe just a generic courthouse shot or something similar could be rather risky.

After all, the man in the photo is a lawyer.

Recently a full-page ad has appeared in Brisbane’s The Courier-Mail inserted by mining company the New Hope Group (pictured).

It spruiks the benefits of its planned third stage of its New Acland thermal coal mine on the picturesque Darling Downs.

The advert includes a graphic showing the claimed rise in job numbers as the planned stage three mine develops over time.

Leaving aside the pros and cons of coal mining, we recognise the company has a right to buy space to state its case as part of its ongoing campaign to gain community acceptance and by extension keep pressure on governments to continue supporting its operations.

But we do question the wisdom of the “creatives” at its advertising agency using a colour palette consisting of a limited range of shades that all appear to be variations on the colour of coal itself.

In addition, a simple line graph showing the growth in employment at the mine might have been sufficient instead of the graphic that resembles the huge scar that an open cut pit will create at the site that’s located in prime agricultural land.

Did someone really get paid for this?