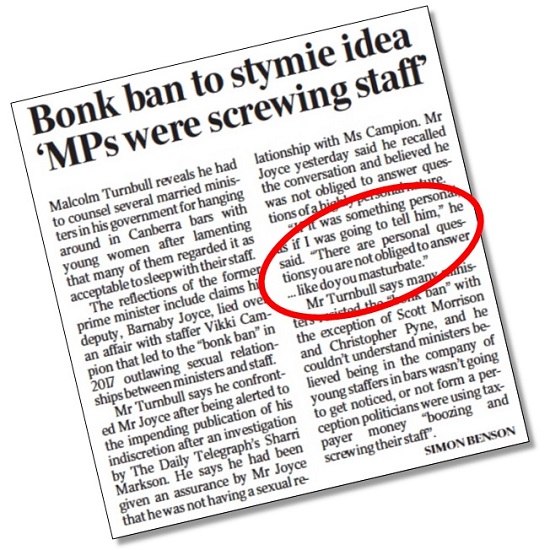 Is it a cover-up? What aren’t our federal MPs telling us?

There was some vital information hidden away in a small story run in The Australian as part of its ambush publication of details of former PM Malcolm Turnbull’s memoirs (main picture).

In this otherwise nondescript item former Deputy Prime Minister and National Party leader Barnaby Joyce let the cat out of the bag when he revealed MPs aren’t being full and frank with their colleagues or voters by refusing to detail when they, shall we say, take matters into their own hands.

We here at The Bug would have expected one of our nation’s major news outlets to follow this up, and perhaps poll all MPs with some pointed questions. But so far, nothing.

Is this a new scandal. Wankergate perhaps?

Readers will recall that two of the world’s first higher-profile cases of the coronavirus were US actor Tom Hanks and his musician wife Rita Wilson. 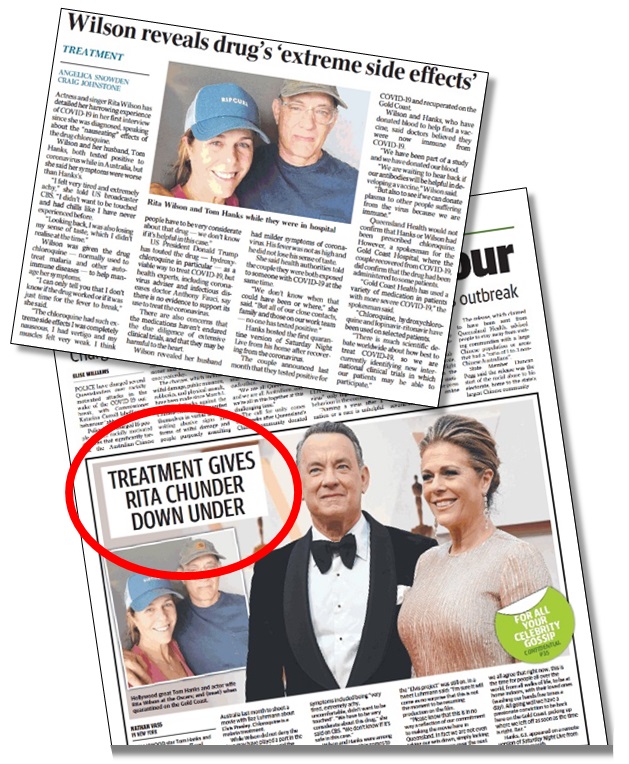 The Hanks — or is that Hankses? — spent some days in the Gold Coast University Hospital undergoing treatment after Tom’s work on the Baz Luhrman movie about Elvis Presley and Rita’s concerts were suspended.

Now it turns out that before they were discharged and flew back to the USA, Ms Wilson Hanks was treated with the controversial anti-malarial drug chloroquine.

This, according to reports in outlets like The Australian (at top pictured) and others, resulted in “extreme” side effects including causing her to feel “completely nauseous”.

This news was presented by The Courier-Mail to its readers on Thursday as Rita experiencing a “chunder Down Under” (at bottom pictured).

Internet-based news outlets and other commercial operations are forever seeking ways to lure readers to their online pages with the aim of recording the number of visitors to prove to current and potential advertisers that it’s well worth their while forking over cash to have a presence on pages seen by so many zillion sets of eyeballs. 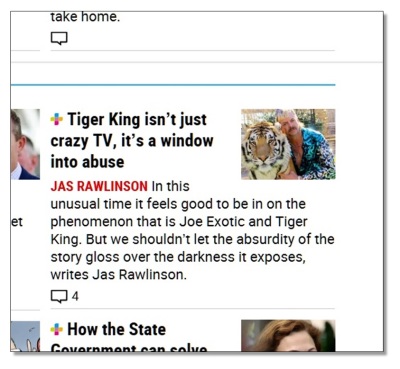 A not so nice side effect of this tactic is clickbait, or the practice of putting up headlines or stories that are, let’s face it, just shit, but tend to make readers want to open them and read them.

It gets even worse when the clickbait reflects some transient and shallow idea, event, or personality currently the focus of popular attention across the internet.

Plus we are well aware that some newsrooms find any excuse to insist that their reporters write more stories on issues that are trending online so that those who read them will return for more.

A classic case came to the attention of The Bug’s media analysis team members during the week courtesy of News Corp Australia’s online site news.com.au.

There on one day this week we found three separate stories running at the same time on that US weirdo the so-called Tiger King who right now happens to be the subject of much attention for his crazy lifestyle and equally bizarre range of friends and associates (pictured).

A search showed the site has recently run at least one, sometimes two, and the three stories we mention above each day in a bid to attract readers and therefore advertisers. Each was lightweight clickbait devoid of any real news value.

Makes us pine for the good old days when news outlets offered news.