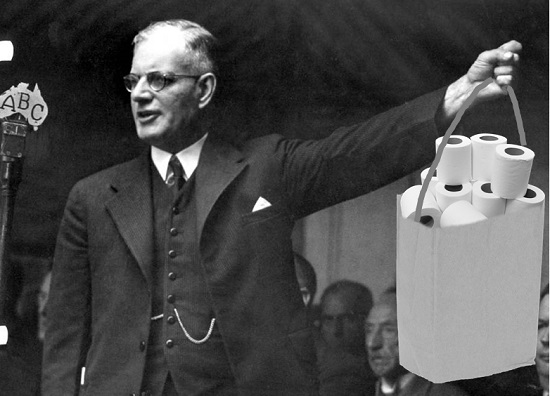 Staff at the National Archives of Australia in Canberra have discovered a copy of a previously unknown speech by the nation’s wartime Prime Minister John Curtin.

The speech notes and a series of related photographs were discovered when archivists were auditing sealed storage units containing World War II records in preparation for renovations.

A spokesperson for the NAA said the photos (main picture) suggested the speech was delivered to a public meeting and the text of the speech dated it to a day in February 1942 in the immediate aftermath of the Japanese bombing of Darwin.

The spokesperson said it was clear that the speech was designed to rally Australians facing a potential invasion.

In his speech Mr Curtin outlines the priorities that Australians were focussed on in the face of a potential Japanese takeover.

“There is no doubt we as Australians face a real and imminent existential threat,” Mr Curtin said.

“The very existence of our nation as we know it, the freedoms we enjoy, our Australian way of life, and yes, even our very lives are at stake in this critical moment in history.

“So it is only natural that the top priority now for Australians everywhere across our land will be to ensure that in coming days we can all continue to comfortably wipe our arses.

“I recognise that this great national objective has caused the scenes we have witnessed in communities throughout our nation.

“There we have seen dozens, sometimes hundreds of Australians quietly lined up outside corner stores and grocer’s shops, politely shuffling forward as shopkeepers individually serve each one seeking an essential roll or rolls of toilet paper.

“I urge you to put this paper to good use, not to waste it. But if an invasion does occur, I also urge you to burn it or bury or otherwise hide it so the Jap doesn’t get his hands on it.

“This is the way we will begin to fight back and to reclaim our nation if the worst happens,” he said.

The NAA spokesperson said the discovery solved a long-standing riddle among historians.

“For decades researchers examining Curtin’s career have been puzzled by scattered references in publications and documents from the time about his so-called ‘Shite on the Hill’ speech,” the spokesperson said. “It seems we have found it.”