Prime Minister Scott Morrison has plenty to cheer about in the latest #newspoll to be released officially in the next few hours.

The PM, in horrendous negative approval territory of at least minus-20 in the last three Newspolls after his summer bushfire missteps, forced handshakes and Hawaiian holiday fiasco, will take heart by positive results in two specific questions #Newspoll put to respondents in the current survey. 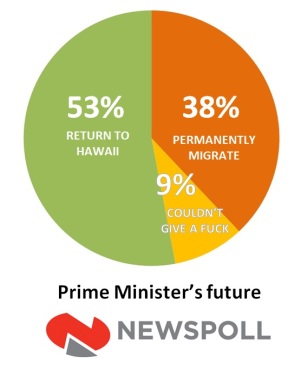 Once again, The Bug has the results early, courtesy of our mole in The Australian‘s Sydney newsoom who has feigned diarrohea and has texted the results from a dunny at News Corp Australia’s Holt Street headquarters.

A comfortable majority – 53 percent – believe Mr Morrison should return to Hawaii immediately with his family and resume their well-earned overseas holiday for as long as they like.

Only 38 per cent believe the trip should be a permanent emigration to the US for the PM while the remaining 9 per cent couldn’t give a fuck what the useless, mendacious, happy-clapper does.

On a specific Sports Australia grants rorts question, the PM also performed strongly, giving him hope that the worse is behind him and a strong leadership role on coronavirus and national economic recovery will put him back in the race for the 2022 election.

A solid 57 percent of respondents agreed with the question “Do you think the PM was only up to his neck in the grants approval process?” while the remaining 43 per cent thought he was “in over his head” in the corrupted and probably illegal process.

In other Newspoll findings, Labor has moved back out to a 52-48 two-party lead and Mr Morrison and Opposition leader Anthony Albanese are locked at 44 per cent all as approved prime minister, with 12 per cent quite rightly not giving a flying fuck because they’ve given up on Australian politics and politicians and, when you think about it, can you really blame them for that?