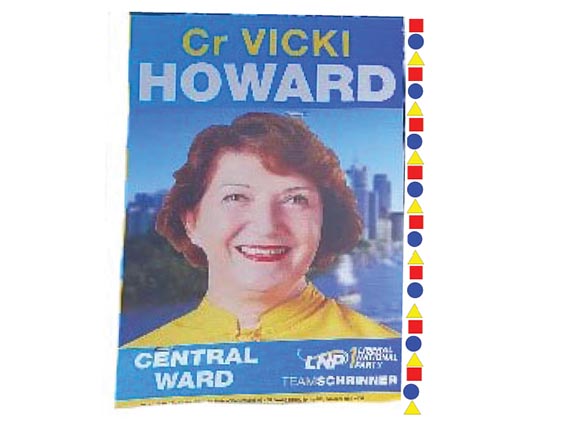 A much-loved sitting councilor and candidate in the Brisbane City Council’s municipal elections later this month has angrily denied cheating by using the council’s new branding image in election material (above).

Sitting Central ward councillor Vicki Howard says her posters look nothing like the council’s new intellectual property that it calls its “cleat”.

“I do not use the council cleat,” Ms Howard said indignantly to the cheat claims from opposing candidates who have no hope of unseating the hardworking and much-loved councillor.

The Bug early last month broke the story that after years of feuding with the Liberal National Party of Queensland, the Brisbane City Council had finally agreed to stop using the LNP’s official council campaign cleat –  consecutive blocks of yellow and blue down the left-hand-side of campaign leaflets, billboards and the like. (See example at bottom from the 2012 council campaign). 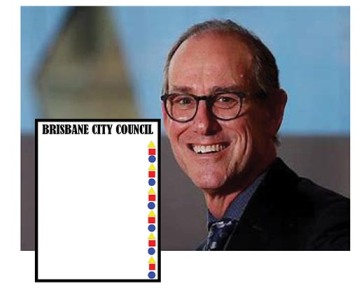 In fessing up to being disgraceful copycats and cheats for so many years, council last month through its CEO Colin Jensen (right) revealed the council’s new branding image; red squares, dark blue circles and yellow triangles down the right-hand-side of all official council documents, leaflets, signs, etc etc.

Council is very strict about its new visual branding and intellectual property: it must not be used for party political purposes.

Cr Howard said it would be virtually impossible for any sane and reasonable observer to think the right-hand-side of her posters was anything like new council documents and general public signage.

“For starters, council’s pattern starts at the top with a yellow triangle; mine always features a red square at the very top.”