Overseas sales of a true-blue Australian invention have soared since UK Prime Minister Boris Johnson’s decree that all new British vehicles sold from 2035 on must be all-electric.

The Michaelia SUV/Ute/Truck wheel clamp sold in its thousands in the lead-up to the May 2019 federal election here as vehicle owners, particularly in rural and remote areas, took action to ensure then Opposition Leader Bill Shorten couldn’t steal those vehicles away in the dead of night.

And now countless equally stupid people in the UK can’t get enough of the Michaelia tyre clamp to thwart PM Johnson in his bid to force them go electric too.

Shorten in 2019 had foolishly set as an aim that 50 per cent of all new vehicle sales from 2030 should be electric.

The Morrison government then cleverly convinced a lot of really stupid country folk that Shorten planned to take their vehicles away and force them to buy expensive electric utes and trucks that “couldn’t pull the skin off a custard pudding”.

The Michaelia vehicle tyre clamp is made by Liberal Party Industries at its huge factory in Mascot in inner-Sydney and plant manager Fitz SteveGerald says the UK sales are being boosted by a cross-media advertising campaign using a beautiful British TV soap star with a soothing, sexy voice ‘that could sell ice to Eskimos’ (top).

“Australia’s first white stocks came largely from Britain so we’ve always known how dumb Britons are and as soon as when we heard of Johnson’s EV plans, we knew this surge in demand would come,” Fitz said.

“We’d already put on extra staff and doubled output to keep up,” he said. “The Michaelas are flying out the door and trucked straight to the international airport.

“Not surprisingly, I suppose, because they’re Pommies but most are asking for the clamps in Tory Blue, whereas before the last election here most sales were in Hi-Viz Campaign Orange.”

Fitz said the wheel clamps were also still selling well in Australia, with many vehicle owners still far too stupid to realise that the threat to their vehicles vanished when Labor was vanquished at that election.

“In fact, quite a few lost their vehicles in the recent bushfires because the thick smoke made it impossible to see where to insert the keys to unlock the clamps.

“In response, we now have a model with a voice-activated ‘shorten sweet’ lock release feature.”

Liberal Party Industries stand by their claim that the Michaelia wheel clamp is practically unbreakable and all models come with a Michaelia Cash-back guarantee.

And its slogan to entice British buyers is virtually same that it used so effectively inits ads here last year (pictured below): “If you give this a go, your motor won’t go”. 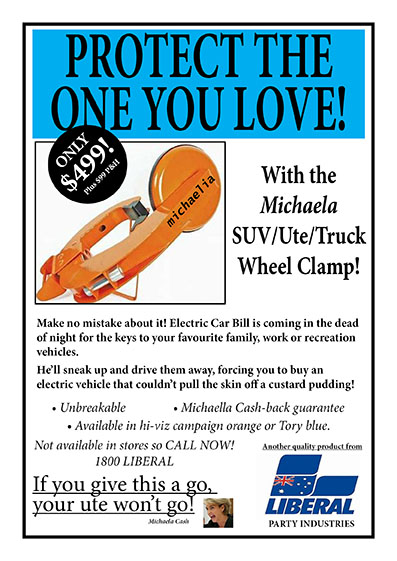