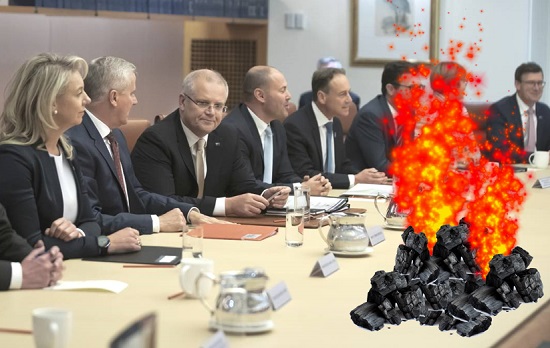 The Morrison Cabinet was deeply divided over what to call the bushfires Royal Commission, compounding a horror start to the year for the Prime Minister, The Bug can reveal.

It reports exclusively that leaks from a noisy and fractious secret Cabinet meeting late in the week have been so extensive that the entire shocking conversation can now be placed on the public record.

And political experts and Peter van Onselen all agree that Cabinet leaks of this magnitude are harbingers of a government in deep, deep strife.

Even the final name for the RC barely had majority support in Cabinet, The Bug can reveal.

When Mr Morrison makes the announcement on Monday, the $75 million inquiry will be officially named The Royal Commission into the Causal Effects of the 2019-20 Fire Season, with Particular Emphasis on Arson and Lightning Strikes But Not Entirely Ignoring the Very Faint Yet Highly Unlikely Possibility That Climate Change Played Some Small and Insignificant Role At The Margins.

The leaks show some senior ministers fought hard against any reference to alleged climate change being included in the title at all.

But a forceful PM explained that he was currently trying to make the right noises that he accepted climate change played some role in the fires and the RC name should reflect that.

“Look, it’s going to rain soon. The green shoots will reappear, homes will be rebuilt sometime, the Australian Open starts soon and those fucking morons out there are going to forget all about these bushfires,” Mr Morrison said. “We can then get back to flogging our coal overseas and fiddling emissions data as we start the job in earnest of recovering from Labor’s debt and deficit disaster.

“Hopefully all those yokels will also forget everything I’ve ever said about climate change up to just a few weeks ago when the cunts made me cut short my well-deserved Hawaiian holiday. Broke my girls’ hearts, they did!”

Home Affairs Minister Peter Dutton: “Hear, hear, Sir. These bushfires have always taken place in Australia and always will. They happened long before white man civilised the place. Plus, as a former cop, I know many are likely the result of arson. That’s been confirmed by stories in the News Corp papers.”

Dutton: “You’re my prime minister. I’ve got your back.”

At one stage in the debate, Finance Minister Mathias Cormann is asked why he wasn’t making any contribution. The West Australian senator responded: “You all ganged up on me when I wanted that other RC back in 2014 to be simply called The Royal Commission into Julia Gillard and Bill Shorten Corruption.”

Health Minister Greg Hunt: “Oh, give it a break, Mathias! Are you still banging on about that? You know that title was far too obvious.”

Cormann (sulkily): “But it was the truth.”

Treasurer Josh Frydenberg: “But Mathias is right in a way. The title is important.

“Remember how we originally worded the banking and finance sector inquiry as the Royal Commission into Really-Hard-To-Believe Misconduct By The Banking and Finance Sectors Who Have Served Australians Brilliantly Since Federation and it got watered down by some goody-two-shoes who are no longer with us.”

Frydenberg: “That’s right. They didn’t even modify the word ‘misconduct’. It gave hope to the anti-bank brigade and they ran with it. Fuck, just imagine the damage that would have been done if we had used ‘corruption’ like we did as a statement of fact with the trade unions?”

The Cabinet leaks suggests tempers flared as the wording of the new bushfires RC took shape.

Dutton: “When we go to war against Iran, I’d like to be considered for Minister of War to go with my other existing titles.”

Morrison: “Please, Peter. One issue at a time.”

Dutton: “And would it mean I could wear a general’s uniform all the time? And carry a gun, again?”

Foreign Affairs Minister Marise Payne: “Have you considered who the Royal Commissioner should be, Prime Minister?”

Morrison: “I’m leaning towards one of this nation’s most prominent and respected  jurists…

Morrison: “Thank you. And I can’t think of a better counsel assisting than someone who now has plenty of time on his hands…”

Voices: “Brilliant, sir. Tony Abbott will do a splendid job!”

Resources Minister Matt Canavan: “And to think I was considering selling some of my Galilee Basin and Bowen Basin coal-mining shares. Plus the big bundle Clive Palmer gave me back in October.”