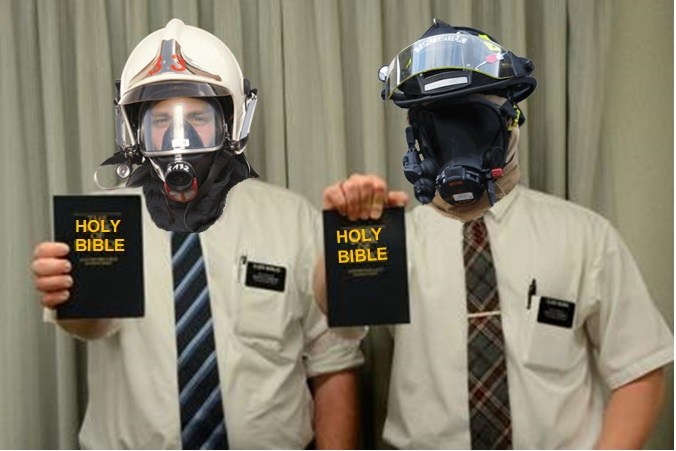 A group of Australia’s most respected firefighting experts has finally secured an emergency meeting with Prime Minister Scott Morrison – by pretending to be far-right-wing Christian nutjobs.

The group of 24 eminent fire experts, serving and retired and from main brigades and country fire services across most states, has been trying without luck to secure a meeting with the PM since April to warn of the tragic bushfire season that now has much of the nation holding its breath.

The Bug understands that one of the group, the former chief of NSW Fire and Rescue, suggested on Monday this week they return to the Prime Minister’s Office in Canberra, this time with their hair fluffed up into a modern coiffure, wearing white shirts and narrow  ties of black or conservative patterns and carrying copies of The Australian and the Australian Financial Review.

“But the lady on the intercom thought we were members of the Institute of Public Affairs and read out the phone number for the producers at News Breakfast, thinking we all wanted to be on the program’s ‘what the papers say’ segment,” that expert said.

“So next day, we changed tactics.

“We dressed the same, cut our hair much shorter, wore thick , black framed glasses as well and some of us carried bibles and Assemblies of God introductory pamphlets and Hillsong discount membership offers.”

The group thought they were in but the same lady guarding the PMO’s office finally twigged and said sternly: You’re the IPA guys who want to be on the News Breakfast ‘what the papers say’ segment!”

Another of the group, a current senior fire chief in South Australia, explained what happened next.

“I’m not sure who it was but one of us just started happy clapping. We all joined in, just happy clapping away at the intercom for what must have been some minutes.

“When we stopped the same lady gatekeeper said something like ‘the PM is a very busy man’.

“But we knew then we were on the right track and metaphorically the door was slightly ajar.”

Explained another of the experts: “A colleague from Queensland who was only trying to help started up with with “There she was just a walking down the street singing do wah diddy diddy dum diddy do” but I don’t think it went down as well.

“Nevertheless, the security  door clicked open and the lady said gruffly: ‘The PM can give you 10 minutes. No more’.”