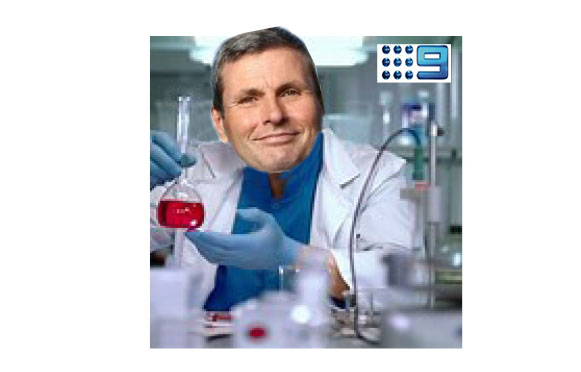 One of Australia’s leading climatologists and power industry experts has questioned the use of out-of-control bushfires as the best way of removing billions of tonnes of tinder-dry fire “accelerant”  lying on forest floors around the nation.

Professor Chris Uhlmann (pictured above in his Sydney laboratory) said: “Uncontrolled fire storms are fine but we must all remember that they are only at their most effective when the sun is shining and the wind is blowing.

Professor Uhlmann, who in his spare time is also the Nine Network’s national political editor, said that in some forests, national parks and agricultural lands, this layer of “fuel” was several metres thick.

“It’s that deep because, as we know, the Greens have banned any winter back-burning and other commonsense hazard-reduction measures outside of the normal 10-month fire season we now have.

“Uncontrolled fires are a very effective way of getting rid of this material but considering the amount of smoke they create, surely there must be a better way?

“So how about some form of biological control just like the Cactoblastis moth was introduced from South America in 1925 and its caterpillar stage helped destroy many millions of hectares of Australia covered with prickly pear.

“Imagine how much cleaner the world’s atmosphere would be – and what strides we’d be making in slowing down alleged global warming – if we could find some living organism happy to gobble up all this forest undergrowth that builds up in the wet seasons rather than burning it?

“Naturally, we’d need to breed a biological predator that enjoys eating undergrowth day or night, in windy or calm conditions.

“Is there any other industry that would benefit more from a successful worldwide fight against alleged climate change, despite their already brave moves towards almost 100 per cent extraction of clean and white coals and excellent results to date with carbon capture and storage?

“It would be money well spent by the coal industry to keep the heat off, so to speak.”