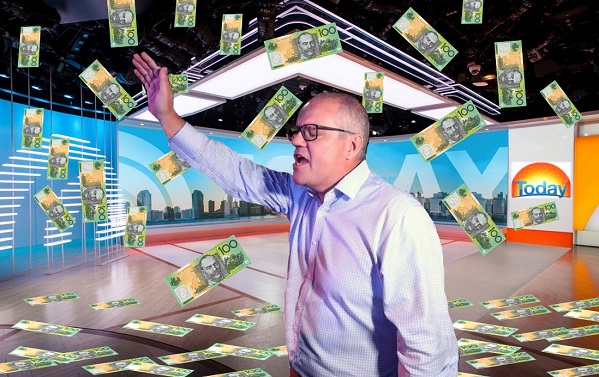 Back in June regional television operator the WIN Network announced it would shut five of its newsrooms that produced bulletins for audiences in Albury, Wagga Wagga, Orange, and Dubbo in NSW, as well as in the Wide Bay area in Queensland.

Michael McCormack, Deputy Prime Minister and leader of the National Party which declares it represents regional Australia, said at the time: “As a former journalist and a former newspaper editor I’m saddened.” 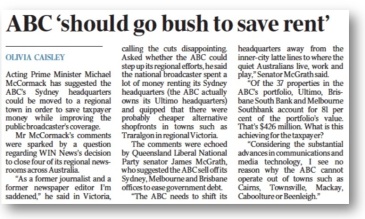 Yet he quickly shifted the focus from WIN’s actions and instead fell back on the tried and true practice of ABC-bashing, saying the national broadcaster should move out of its Sydney HQ and use the money saved on the high-cost facility to bump up regional coverage (pictured).

Queensland LNP Senator James McGrath joined in and agreed with McCormack, helpfully diverting the issue from the real actions of a private licensed TV network to the non-existent shortcomings of the ABC which has always and continues to deliver a high level of regional coverage, including as the designated emergency broadcaster in times of natural disasters. 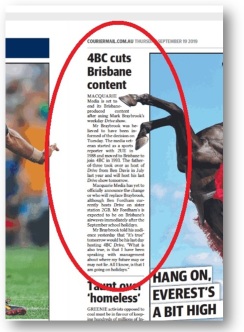 Yet last week tucked away on page seven of The Courier-Mail was the announcement that Brisbane AM commercial radio station 4BC was about to ditch its last locally produced program — its drive-time session from 3pm to 6pm (pictured).

That means no programs will originate from 4BC’s Brisbane studios but listeners will hear voices networked from its Sydney sister station 2GB including Alan Jones, Ray Hadley, and Steve Price.

Yet have we heard any voices raised among our political leaders — on either side of politics? Shouldn’t we have heard a chorus of complaints by now, perhaps seeking to challenge 4BC’s broadcasting licence for failing to fulfill its obligations to its local audience?

Maybe the explanation is provided by other news that hit the headlines just days after the announcement that 4BC was to become a relay station for 2GB.

But just this week colourful former ad man John Singleton announced he was selling his 32.2% stake in Macquarie to Nine (pictured).

You may remember Nine is the struggling little firm that recently entertained Prime Minister Scott Morrison and other federal government heavyweights at a fundraising dinner for the Liberal Party on the set of the Today show at Channel 9’s Sydney studios (main picture).

Maybe that’s why we haven’t so far, or ever will, hear a political voice raised about the recent evaporation of 4BC’s local programming.

The Bug generally dangles itself in front of a commercial TV news broadcast to find examples of participles well and truly misplaced. Channel 9 in Sydney is one of our favourite participle-danglers, especially those lovely young things reporting on suburban car crashes and that day’s Sydney shootings. 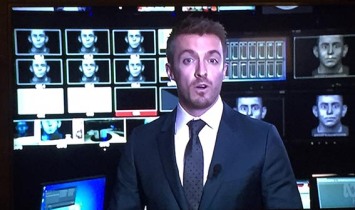 So it came as both a shock and disappointment when the other night a journo The Bug respects quite a lot got into a bit of a dangle himself.

The ABC’s Sydney police reporter Mark Reddy was going along silkily on a piece about how the face of a human skull found several decades ago had been reconstructed using DNA and (brand name deleted) spakfilla.

Oh, dear. Still, we offer this.

Facing the ABC cameras and looking rather suave and handsome in his dark blue suit and tie, The Bug forgives Mark for his slip-up. He really is a very good journo.

On the subject of dangling participles, The Bug got excited the other night when yet another fresh face appeared on 9’s 6pm Sydney news, reporting on a ute that had smashed into a bus shelter in Broadway.

We got out our stopwatches and took bets as to how long it would take for the pretty young thing to dangle a participle. And you know, what? Not a single one was hung out for us to fry.

She did, however, say that one of the victims was flung 70 metres through the air. We suspect she meant “several”.

I wonder if she’s related to that other pretty young thing the other day on 9 Sydney’s 6pm news who said a helicopter had plunged into seas just off Newcastle harbour that were “35 kilometres deep”. Even the graphic on-screen backed her up.

It was such a blooper – it was 35 metres – that newsreader Peter Overton cleared it up at the end of the bulletin. When the never-fucking-ending, self-congratulatory, electronic mediocre admits a mistake, you know it’s a biggie.