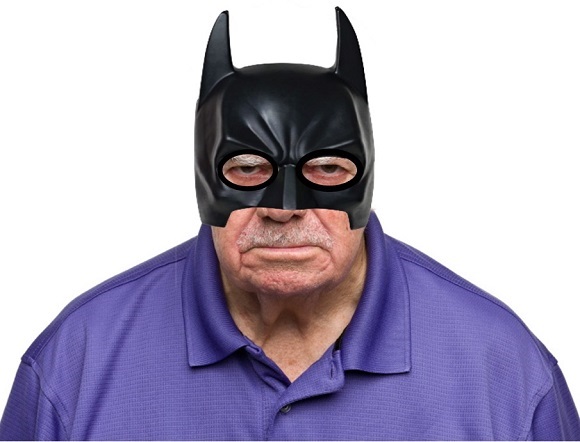 Crime-fighting superhero Batman has used his 80th birthday at the weekend to come out as gay.

Speaking from his Gotham City nursing home, Batman (main picture) told The Bug that he acknowledged that rumours of his sexuality had dogged his career and he wanted to set the record straight.

“Yeah, all those years ago when I decided to put on tights, a body-hugging top, black budgie smugglers, and black leather boots I knew I might start that type of speculation,” he said.

“Then I decided to pair all that with a flowing black cape and black leather face mask which really sealed the deal. Jeez, I looked so gay that I wasn’t at all surprised when people started whispering behind my back.

“Of course way back then I was a strapping, muscular young man with a healthy appetite for, shall we say, all types of physical activities. So I made the most of it and started hanging out at Gotham City gay bars, but only on theme nights so I could wear my costume.

“I can’t tell you how many times other men told me how much I really looked like Batman, and the costume never failed to get me laid. If only they all knew,” Batman said, breaking into a laugh.

But his mood changed dramatically when The Bug raised the subject of his former sidekick Robin.

“I no longer speak to Robin, not after what he did by making those allegations against me,” he said.

“All I can say is I would never take advantage of someone his age, and those claims he made did my career a lot of damage.

“As you know I’ve always denied the allegations and in the court case my lawyers tried in vain to show that my costume made it physically impossible for me to do to Robin the things he claimed I did to him.

“My lawyers also argued that I couldn’t have done those things because I was never ever really alone with Robin. There was always Commissioner Gordon or Chief O’Hara hanging around.

“Yet I was found guilty and my first appeal failed, but thank goodness I got off on the final appeal.”

Batman called a sudden end to the interview when The Bug asked if he saw parallels in his rift with Robin to the sudden estrangement at around the same time between prominent Gotham City playboy and  philanthropist, Bruce Wayne, and his ward Dick Grayson.

“Look there’s no comparison,” he said as he rose to leave. “But I can say I…. I mean, Bruce loved Dick. It’s as simple as that.”