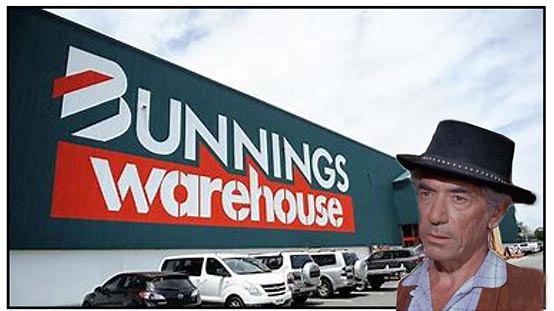 Several high-profile business resignations overnight have sparked comparisons with current problems being faced by House of Representatives first-termer Gladys Liu, in trouble in her Melbourne-based seat of Chisholm because of alleged Chinese links.

In Melbourne, the head of Bunnings Warehouses Australia Frankie B’liu (above) resigned after admitting that he had “misspoken” yesterday over the amount of Chinese-made products stocked by the behemoth household, hardware and gardening chain.

Mr B’Liu, the company’s CEO, had stated that he did not know if any Chinese-made goods were stocked in Bunnings outlets around the nation, boasting the company’s loyalty was 100 per cent behind local suppliers.

But in a media release later in the day, he clarified those remarks, saying he had been shocked to discover that “maybe a fair bit of Chinese-made stuff” made it onto Bunnings shelves.

“Oh, who are we trying to kid,” Mr B’Liu said in an exclusive phone interview with The Bug later still. “It’s actually about 92 per cent. Who would have known, eh?

“Apart from seedlings and some chook shit manure in the gardening section and a few overpriced paints and tiles we can’t move, Bunnings shelves are chockablock with cheap Chinese shit.

“How else would we possibly afford to have dozens of staff helping customers if we couldn’t sell for $34.50 a plastic rake we land in-store from China for 79 cents and whose cheap wooden handle turns into a full circle after a few weeks under an Aussie sun,” he said.

And in Sydney, the general manager of a firm that provides more than 90 per cent of all fortune cookies used in thousands of Chinese restaurants around the nation tendered her resignation after the cookies, despite their “made in Australia” labeling, were found to be baked in China by a company with strong links to the Chinese Communist leadership.

Ms Porta Liu only two days ago had boasted that all her products were baked in local ovens using only Australian ingredients.

“Our loyalty is to Australia and Australia only,” Ms Liu had said at that time.

But in a statement released with her resignation yesterday Ms Liu admitted to being shocked when she discovered all the company’s biscuit products were in fact baked in Guangdong Province in China by Mayo Zedong Pies, Pastries and other Joyous Provisions, a company with known historic links to the Chinese Communist leadership.

“Who would have known, eh,” Ms Liu later told The Bug through an interpreter.

It’s now been revealed that the Chinese bakery is owned and run by Yun Phat Shyster, believed to be a cousin on his mother’s side of Chinese Xi Jinping, General Secretary of the Communist Party of China, President of the People’s Republic of China, and Chairman of the Central Military Commission.

Ms Liu told The Bug said she had never met Yun or indeed knew anything of him until the latest disclosures.

“Any suggestion that I know that Comrade Yun or anything about his bakery operations is an outrageous libel being spread by enemies of the glorious motherland,” Ms Liu said.

Meanwhile in Brisbane, well-known restaurateur Llew Gladdis has quit the industry after coming under increasing pressure to reveal the ownership details of the popular South China Sea Restaurant.

Rival restaurant operators have been pressing Mr Gladiss to declare the ownership details but he has refused to do so.

The issue has drawn the attention of national media, with Mr Gladiss agreeing to an interview with Sky TV’s Andrew Bolt to clarify his position.

The Bug understands Mr Gladiss agreed to the interview only after being assured Mr Bolt would ask only “soft ball” questions.

However, he appeared unsure and hesitant throughout the interview in which Mr Bolt wrong-footed him from the first question by asking “How many players in a team and how many innings in a game?” before trying to explore Mr Gladiss’s knowledge of rules pertaining to pitching in the foul area.

Mr Gladiss announced after leaving the Sky TV studios that he was “quitting the restaurant game” and would devote his time to the many honorary positions he does not hold in any organisation.