The decision by Prime Minister Scott Morrison to nickname his shiny newly upgraded VIP jet “Shark One” has provoked many to come out with all guns blazing.

Our loveable, daggy-dad-next-door PM probably thought he was being a bit cute and clever as well with the US-themed nickname for the plane that now pays homage to the Cronulla Sharks NRL side that he has loved dearly since becoming PM.

The plane is a previous commercial A330 bought in 2015 by Airbus who modified it into a KC30-A tanker-freighter. A quarter-of-a-billion-dollar, taxpayer-funded refit later, it is now a 100-passenger  plane. Mr Morrison can already lie down flat but all the other passengers will be able to do that too.

It also means that the PM and his entourage can now travel from Australia to Russia non-stop. While The Bug hopes they make the one-way trip as soon as possible, many others took to social mediocre to take the mickey out of the PM’s nickname.

“Wasn’t Shonk One available,” one witty Twitterer asked. It might have been us.

Another suggested Shart One. We at The Bug, being proprietors of a family-friendly newspaper, had to look that one up. Shart, apparently, is what happens when an over-enthusiastic fart gets the shits, so to speak.

We liked that one seeing Morrison generally has that effect on many people anyway.

But, come on, Australia, we can do better than that!

The Bug has managed to secure three rare and slightly age-worn copies of one of the finest, least profitable, political satirical books ever published about Queensland in 1984 to award to the three best nicknames we receive.

Baby Koala Blender Horror: The complete guide to Australians migrating to Queensland came out to almost universal distain at the height of hillbilly dictator Johannas Bjelke-Petersen’s vice-like grip on the Sunshine State. 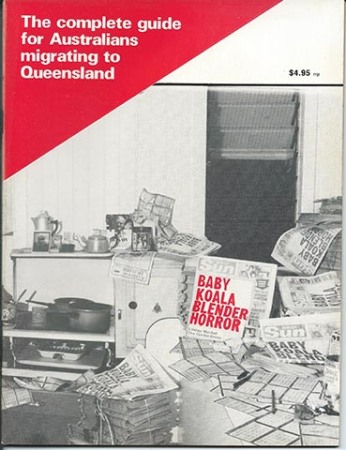 Text your nickname suggestion to
0422 000 603 by 5pm next Monday, September 16. Please do not ring as that will lead to automatic disqualification. Australian residents only. Only the winners will be contacted for their mailing addresses and no correspondence will be entered into. Covering the cost of mailing these books out will be bad enough for this loss-leading newspaper so we’re not going to get bogged down with any shit over this, okay?

But just to make sure you’ve got to work just a little to get the chance to get your hands on a copy of this magnificent book, here are a few other suggestions from us.