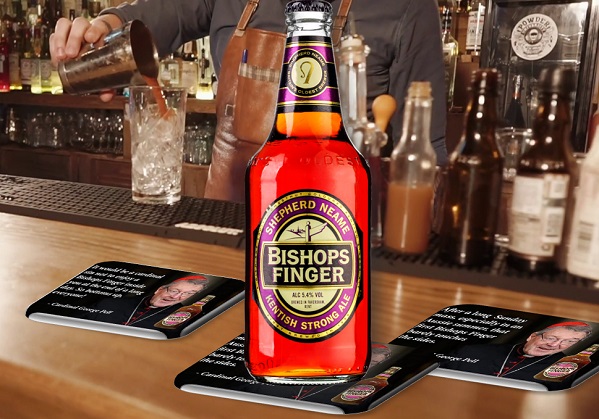 The decision by Cardinal George Pell to promote a British real ale from his prison cell has rung all sorts of warning bells for The Bug’s resident finance and marketing expert.

This isn’t really in the realm of financial advice, but I don’t know who else to ask. You see the other night I went to my local hotel for a quick drink with some mates and ordered a beer that I got to know and love while on a holiday in the UK recently.

When the barman put the bottle on the bar he also laid out a few beer coasters and on them I saw Cardinal George Pell (main picture). Imagine my surprise when I read the coasters and found out he is endorsing this brand of beer.

Now, I’ve been a good Catholic all my life, but I find it somewhat disturbing that someone who was previously so high up in the church is now endorsing beer. Can you tell me what on earth is going on and why he is doing it?

I have to tell you I’ve had the same experience and it came as a shock to me too.

I can explain to you why the Cardinal has agreed to be the face of one of those lukewarm Pommy brews, but first let me recount my own experience of just a few nights ago.

It was about 2am and me and some colleagues were just about to wrap up a brisk working lunch when it hit me.

“Uh, oh, Georgie boy’s in real trouble,” the old Morrie said out loud when I saw his clerical visage staring back at me from a beer coaster on the table I was sharing with a few of my female business consultants.

Tiffany, Courtney and Misere and I had ordered a final palate-cleansing ale at my favourite steak house, the Gelded Vegan tucked away in a back street in Brisbane’s entertainment precinct, Fortitude Valley.

We’d been working our way through the eatery’s list of boutique beers and the last one we ordered came with its own promotional coasters. So, just like you, Parishioner of Perth, once I lifted my beer glass I saw good old GP’s face staring up at me from an advertisement for the UK drop, Bishops Finger Kentish strong ale. 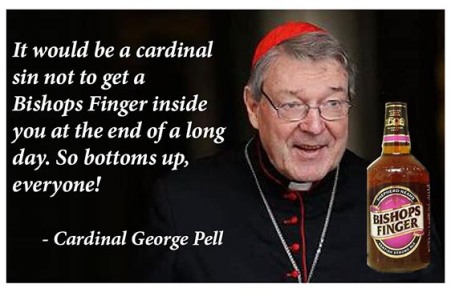 I was a bit stunned, not just at the fact my old mate Cardinal George Pell had scored a gig while incarcerated but also that he was silently spruiking a UK drop in what was clearly a major promotional campaign (pictured left and below).

“Who’s in deep shit Morrie?” enquired Misere as she squeezed my upper thigh in the hope that she might be the one to kick on with me at my favourite gentlemen’s club seeing the night was still young.

“Think about it, Laydown (my nickname for her),” if Cardinal Pell thought he was going to be cleared by the High Court of Australia and would be allowed to resume his duties as the third most senior Catholic at the Vatican handling all the church’s finances, do you think he’d be promoting an English real ale?

“No, he’d been busy promoting one of those insipid Italian lagers you’d normally use to clean muddy boots with – that Peroni weak-as-piss stuff or that Nasty Azzurro mouthwash or whatever it’s called.

“The message I’m getting loud and clear here, ladies, is that Cardinal Pell knows he’s up a transept without a choirboy when it comes to getting off the trumped-up child rape conviction that has seen him locked away.”

I explained to the ladies how the old Georgie Boy and I had worked together in Melbourne back when he was just the Archbishop there and long before he reached the dizzying heights of the Vatican.

I met him because a friend of a friend told me George was seeking someone with my unique organisational and financial skills.

That’s why we met and hit it off at once. He told me he wanted to establish a process or framework for handling sex abuse allegations and compensation claims within the church in Victoria.

“The church is both asset and cash rich Morrie,” he informed me, “and it must be protected.”

I could see straight away what the guy had in mind and he confirmed it by laying out his goal: “I want a response that puts an end to any allegations of wrongdoing by priests and others in the church.”

We worked for weeks and weeks with that goal in mind and finally came up with what became known as the Melbourne Response which exactly met George’s simple aim to a tee.

“Yesiree,” I told my trio of female as we sipped a nightcap each. “George must think he’s in deep, deep shit.

“But ladies, I have an idea,” I declared, clicking the thumb and forefinger of my left hand near my head to emphasise my light-bulb moment and as the ladies started taking their tops off, I said: “No, not that.”

My idea, I explained, is to ask good Catholics just like you, Parishioner of Perth, to help George cover the costs of his High Court challenge and improve his chances of a successful appeal there.

Of course, these days you can’t set foot inside a court room without the meter ticking over at hundreds or even thousands of dollars a minute.

Those baristas have to pay for their wigs and silk gowns somehow and the tips they make don’t cover it that’s for sure. So to make a challenge a success, I’ll need to raise a couple of hundred Ks.

If you want to assist you could start by kicking in a few bucks – say $1,000. If you or your friends want to support Georgie Boy’s bid to finally get justice done and seem to be done, send your money to me as soon as possible.

Make a cheque out now to the fighting fund I’ve established, Cardinal’s Appeal Seeks Help, and I’ll get things moving at my end.

Bugger it, to save your time and mine, just make it out to CASH.

I’ll be in touch. 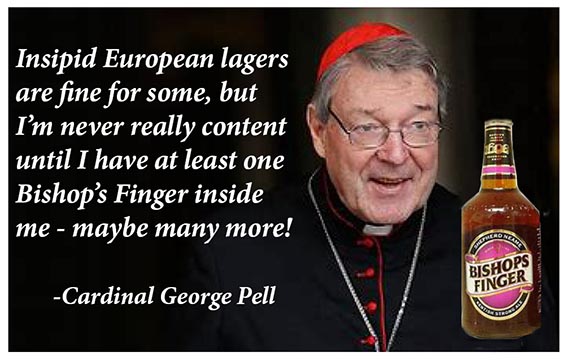