A series of print-media ads for a famous British real ale and featuring convicted child rapist George Pell has angered the Victorian Government so much it is investigating if it can strip Pell of any payment under “proceeds of crime” legislation.

Examples of the full-colour advertisements are shown at top and below.

Victorian Premier Daniel Andrews told The Bug: “If we can detect the slightest suggestion that Pell has garnered this publicity and gained any financial reward because he’s a convicted paedophile, then we’ll certainly be taking action.

“Victoria already has laws on its books that make it illegal to benefit financially from criminal activity and we’ll come after Pell if need be.

“We will not tolerate a criminal ring operating in our penal system.”

From London, another famous family-owned brewer has welcomed the support for Britain’s famous real ales but T & R Theakston from the market town of Masham, North Yorkshire, couldn’t resist a plug for its own product.

“Our guess is that Cardinal Pell might change his mind about his favourite British real ale if he ever got to cop a mouthful of Old Peculier.” 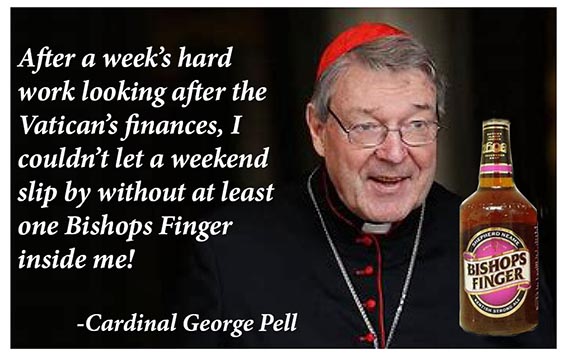