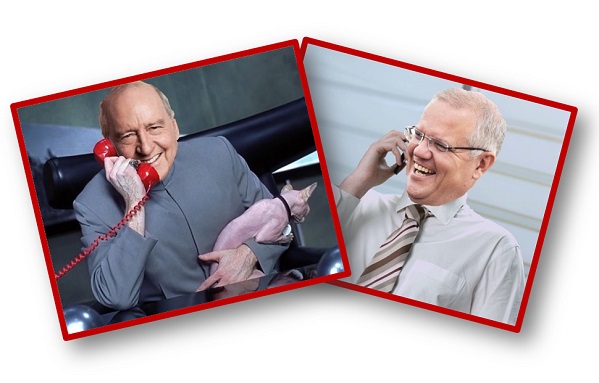 In a worldwide exclusive, The Bug has been handed the tape-recording of a recent telephone discussion between Prime Minister Scott Morrison and 2UE Sydney shock-jock Alan Jones. It’s reprinted here in full for no other reason than to show the special relationship that exists between our nation’s two most powerful men outside of the cricket Test captaincy.

Jones: Now, now…. come on Scottie… there’s no need for old friends to be so formal. Sir will do.

Jones: Hope you didn’t have to wait too long. Had some VIPs on the line. So, what’s on your mind? The Pacific Islands Forum is my guess?

Morrison: Exactly sir. I just wanted to call to make sure you were okay with comments I reportedly made on Tuvalu after your comments the media distorted about… you know … socks and stuff.

Jones: Well, I’ve got to admit I was rather hurt, Scottie. Is it true that you said my comments were “way out of line”?

Morrison: Now that’s exactly why I’ve felt the need to call you, Sir. Reporters have wilfully misrepresented what I said.

Jones: That does happen, Scottie. My goodness me it does.

Jones: So what did you say?

Morrison: I had made it clear I hadn’t heard exactly what you were reported to have said but then meant to say that my experience is that your way with words was fine.

Jones: And those bastard reporters had a go at you for not saying that? Just went ahead and misinterpreted what you clearly meant to say if they’d thought things through properly? Jesus wept! What is this nation coming to?

Morrison: It’s terrible, Sir. But what can you do? Apart from the guys from Sky News, Channel 7 and Sunrise, their lack of professionalism is deplorable.

Jones: But didn’t you say something like “I find that very disappointing”?

Morrison: I certainly did Sir. I couldn’t believe that so many journos would wilfully misrepresent what I clearly meant to say in the first place.

Jones: Sadly that does happen, Scottie. I find it very disappointing too. Now all these cowardly advertisers have pulled their money from the station and management has been forced to issue a statement saying I’ve been told I’m sacked if I make one more so-called “offensive” comment which it’s now clearly obvious to anyone with a skerrick of logic or intelligence that I never really said at all.

Morrison: I did read that, Sir.

Jones: Yes, they told my secretary they were releasing the statement saying the network chairman had spoken to me.  We all know the drill….

Morrison: Indeed we do, Sir.

Jones:  I sent a written apology to that Kiwi woman who’s ruining a perfectly good union training ground – and I mean the football type of union, not the other one….

Jones: ….. and then I make a public “apology” on-air while actually justifying my original remarks by claiming I’m only doing to that Kiwi woman what others have done to my friends like Peta Credlin, Miranda Devine, Janet Albrechtsen, and others.

Jones: But forget that rubbish …. what’s this other rubbish you sprouted about having two daughters and saying something like “So you can expect that’s how I would feel personally about it”.

Morrison: That just slipped out. I was thinking at the time how lucky it was that my two daughters lived in a place where water won’t be lapping at their feet soon…

Jones: (laughing) Lucky you didn’t say that out loud! Not much room for misinterpretation there.

Morrison: True. But all I was doing there, Sir, was letting people know that I have two daughters. Having two daughters is the sort of thing any beer drinking, pie-eating, sports-loving bloke-next-door would be likely to have, you know, as any typical red-blooded man might end up with as a consequence of heading home to a loving and receptive wife after a day of beer-drinking and sports watching with your mates and then…..

Jones: I don’t have children, Scottie. Are you suggesting I’n not a red-blooded man?

Morrison: Not at all Sir. Goodness gracious me, Sir. No. No. No. It’s just the image thing I’m still pushing all the time. I think there might be another election win in it for me with this daggy dad thing I’ve got going at the moment in lieu of any real policies. Anything to keep those Labor wreckers out, right?

Jones: Well, we’re 100 per cent together on that argument, Scottie.

Morrison: And once I had accidentally mentioned my daughters, I’m sure I said something like “I feel personally wonderful about having two such lovely daughters”. Once again, I have been wilfully misinterpreted. How the media has managed to link what I said there simply to show what a loving, Christian family man I am to the distorted comments about shoving socks down throats that we all now know you didn’t really make beggars belief.  It really does.

Jones: It makes me absolutely livid when I hear any miss representing of what I’ve had to say.

Morrison: So, we’re good then, Sir?

Jones: Brothers in arms, Scottie. We’re just two outliers, battling political correctness, the rise of bossy women who don’t know their place, Guardian Australia and that wretched Murphy woman, those Commies from The Saturday Paper and of course the growing menace of world socialism and the rise of the extreme alt-left.

Morrison: As you know, Sir, I’m 100 per cent for women advancing themselves if no men want the jobs they’re seeking.  So I’m still good for my regular slot?

Jones: Let’s not get ahead of ourselves, Scott.