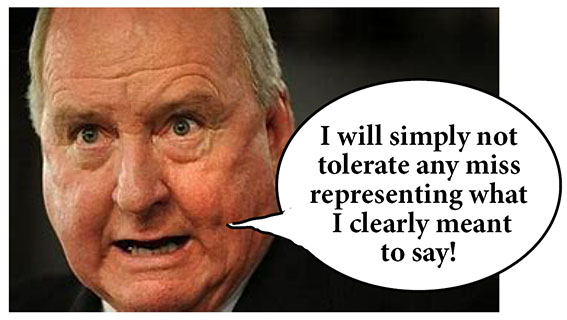 A Nobel Prize in medicine probably awaits the elite, international team of psychiatrists who can work out why Alan Jones hates women with such a single-minded vehemence.

Clearly, as an urbane, nattily dressed, well travelled, intelligent, and well spoken gentleman – if not someone who always speaks well of others – Jones could have his pick of Sydney women.

But what is it with The Parrot and his constant alienation of intelligent, successful, clear-thinking women, especially from the left of politics?

His verbal assault this week on NZ Prime Minister Jacinda Ardern was typical of the spiteful spittle he aims at the supposedly fairer sex from time to time, especially successful ones, and his expressed desire that our own lamentable dipstick of a leader should shove a sock down her throat has met with the usual torrent of criticism and the loss of some 2GB advertisers.

So The Bug looked forward to reading just what one supposedly successful woman had to say about Jones’s latest mysognistic mutterings, namely one Pam Corkery in a piece in today’s news review section of the Sydney Morning Herald.

Go, girfriend. Give the bastard both barrels.

Especially now that we know Corkery is a successful journalist and broadcaster who served a term in the New Zealand parliament for the left-wing Alliance party.

Corkery surely would be grist for Jones’s mill and he would instinctively be up to his nuts in hating her guts, metaphorically speaking.

But that heading’s not the best start, is it?

Such physical violence suggested against a man just because he has a different view seems rather, how can we put it, alanjonesish? Weakens the argument, somewhat?

The day I met Alan Jones: I should have socked it to him would have been better.

Still, that was probably a sub-editor’s work now that Nine Entertainment has come up with the bright idea of maybe using some in-house subs in their newly acquired mastheads, so we won’t hold Ms Corkery to account for that one.

After dissecting Jones for calling Ardern a clown, an utter lightweight, a hypocrite and gormless, Corkery rued the fact that successful women on both sides of the Tasman have for years had to put up with the “same old same old” from the likes of Alan Jones who “fears irrelevance the same way he fears intelligence”.

So she then offered this: “Women smile wearily but we have our plans. When the revolution comes, we know exactly who will be first against the wall.”

Now Jones is no doubt very familiar with the wall, as a concept at least. He would readily pick up on it if he read Pam’s piece.

But, ouch! Such a violent response to Jones’s own suggestion of violence. Someone might survive having a sock shoved down their throat, just like someone might make it safely to shore after being put in a chaff bag and hoistered out into the sea, but a firing squad seems rather, you know, permanently injurious to one’s health.

Or put another way: a wall is not needed to to shoot down the major glaring flaw in Corkery’s argument here.

Perhaps next weekend’s SMH will give Corkery the chance to make the point that she was speaking metaphorically. And if Jones and his ilk were ever put up against a wall, what she clearly meant to say was that those much-maligned women would be happy to seek their revenge by throwing socks at them. Very smelly ones though.

Of course, there’s always the chance that Corkery could use the second column to slam critics who she will claim, with nary a blush, have clearly misinterpreted what she mean to say in the first place. In other words, it’s all their fault.

But that would be plain silly and way beneath anyone with even a modicum of logic, commonsense, self-respect or, indeed, intelligence, regardless of what they’ve got between their legs.