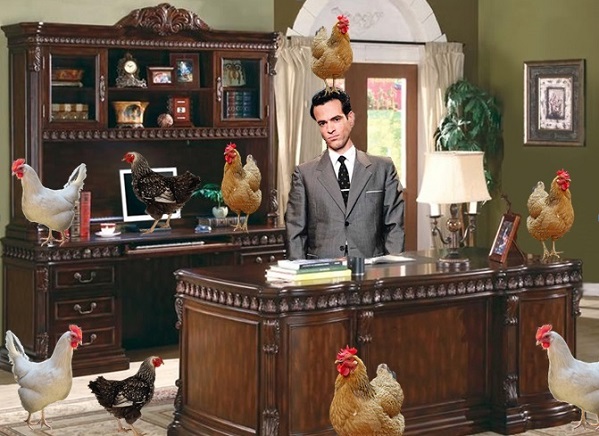 Iconic retailer David Jones is to close all 41 of its “brick and mortar” stores across Australia immediately, throwing close to 60 mostly elderly shop assistants onto the unemployment scrapheap.

As well, billions of dollars in stock are expected to be dumped on council tips following the store closures because, as one retail sector analyst told The Bug,“Who in their right mind would buy DJ’s old-fashioned, overpriced shit even if you could find someone to sell it to you?”

While the retail sector has been struggling for some time, The Bug asked assistant director of the Business Council of Australia,  Hardy Wright (main picture), if the move by DJs was the first signs of much wider and deeper problems for the Australian economy.

The Bug: Thanks for your time. What do you see as the repercussions of the store closures by David Jones?

Wright: Look we live in market economy and it’s survival of the fittest.

The Bug: That seems a bit callous, don’t you think?

Wright: No. The market exists to deliver goods and services at affordable and competitive prices, so if you can’t do that as a business you get eliminated. Simple.

The Bug: What about the workers losing their jobs?

The Bug: On the subject of workers, the BCA almost always opposes wage rises.

Wright: Absolutely, business and our economy simply can’t afford them.

The Bug: But you say that about every wage claim. Plus, you support cuts to penalty rates.

Wright: Their complete abolition if possible. They are a drain on business growth in a 24/7 economy.

Wright: And wages too of course.

The Bug: But don’t you think the continued low growth in wages in Australia has played a role in the decisions that firms like David Jones are now taking?

Wright: How do you mean? Hang on, before I answer – what’s that doing here?

Wright: That bird over there on the floor. It’s a…. a chicken, isn’t it?

Wright: Wonder how it got in here?

The Bug: Not sure. Anyway, has low growth in wages played a role in the DJ closures.

The Bug: Well, people who would normally be spending on retail goods and services haven’t had the spare cash to do so.

Wright: Well, I think…. Wait. Look, there’s another chicken. There on the bookcase.

The Bug: You don’t see that every day. What’s the view of the business community on the stewardship of the national economy by the Abbott, Turnbull and now Morrison governments?

Wright: Well as you know a Liberal government is always better than a Labor one. I think our members agree on that….Shit, there’s another chicken now. Over there.

The Bug: Oh yeah, I see it. There’s more behind you too. So…..the economy seems to be going nowhere. Nobody is spending because they’ve had no growth in their wages, houses are unaffordable, people’s credit cards are maxed out and other key indicators…….

Wright: Shit. What are they doing.

Wright: The chickens. Looks like they’re ……roosting. Can we do this interview later. I gotta get these birds out of here.

The Bug: Sure thing.