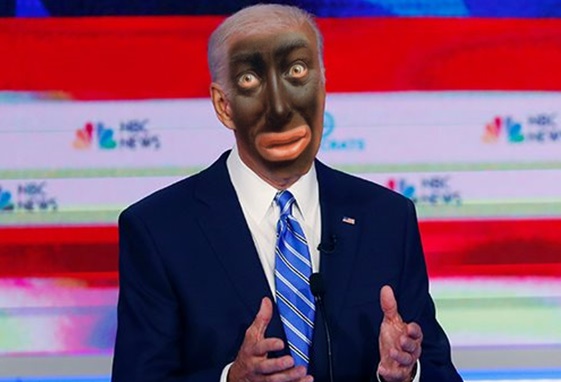 An appearance by former vice-president Joe Biden on US morning television has drastically altered his chances of being the Democratic Party’s nominee to run against President Donald Trump in November 2020.

The highly volatile issue of race was again at the centre of the latest incident in which Mr Biden undertook a live studio interview with NBC News while appearing in blackface make-up (main picture).

Mr Biden had agreed to the interview in the wake of an attack on him by fellow Democrat, Californian Senator Kamala Harris, during this week’s debate with other Democrats running for the US Presidency.

Senator Harris  took the opportunity to criticise Mr Biden over his past remarks about working constructively in the past as a US Senator with known segregationist in the Congress to secure legislative outcomes.

His appearance on air in blackface to discuss his debate performance appeared to shock NBC News interviewers who asked him to provide an explanation.

“Happy to do so,” Mr Biden said. “You see my wife Jill and I were invited to a fancy dress party last night and I went made up as Al Jolsen, but haven’t had time to wash it off yet.

“Jill went as Catwoman. She’s so hot and looked just great in her catsuit. I couldn’t keep my hands off her.

“But after we left the house she realised she’d left her cat behind and wanted to take it as part of her costume.

“So we had to go back to our house and I grabbed her pussy, then we went to the party,” Mr Biden explained.

NBC News later reported that a snap poll it undertook following Mr Biden’s appearance showed a 36% lift in his support among Democratic voters from 31% following the candidates’ debate to 67% after his morning TV appearance.

“But our polling also shows his appearance today lifted his support among Republican and Trump voters from 8% to 34%.

“Biden will walk away with the Democratic nomination and trump Trump in a landslide in November 2020 if these numbers hold.”