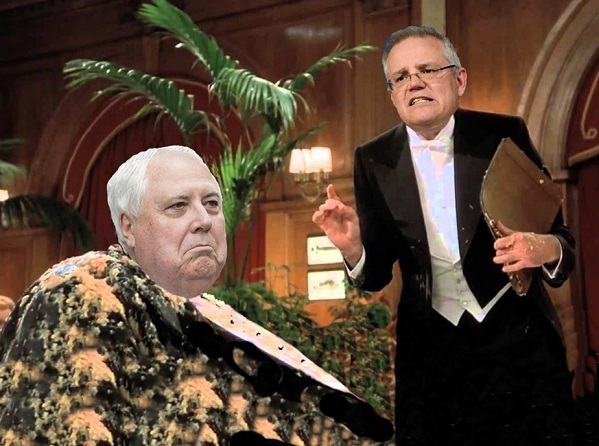 I’ve always been a glass half full of a very cheap Berri Estates five-litre cask of a leftover reds blend sort of guy … so I’ve been trying to think of upsides to Labor losing the unloseable election.

I’ve come up with a list that if nothing else cheered me up a bit.

It’s for all of you out there still wondering why Labor was sent to the naughty corner after six years for treating the voters with contempt while the same didn’t happen to a very, very average government with a shit history of economic management, bitter internal divisions, no real policies for the times, a very ordinary campaign performance despite the revisionist theories being mounted about it by the media and more than a whiff of corruption about it.

So here goes, in no particular order of merit….

Some day, we’ll find out exactly how much this putrid barrel of festering lard spent. $40 million? $60 million? He says $55 million. Election campaigns are not much different from selling soap powders; throw enough money at the consumers and you’ll get a bigger market share.

While voters Australia-wide had the good sense to see through Palmer’s pathetic self-promotion, they still got the message from what was essentially a vicious anti-Labor ad campaign and turned to One Nation and the government. Palmer is already saying he has achieved his main goal of keeping Labor out.

People on the left can sit back and watch Palmer explode Mr Creosote-like if the Morrison government doesn’t give him the go-ahead on his central Queensland coal mine projects for “services rendered”.

I saw nothing wrong with Shorten but I despaired these past years when so many of my left-leaning friends marked him down; disliked him even.

I told many they should be careful not to infect too many others with their negative vibes less they end up getting what they deep down might have secretly hoped for: no prime ministership for Shorten.

Shorten is now history and that marketing genius Morrison will have to come up with something better that “The Albo Australia can’t afford!”

3: The Murdocracy will continue on its evil way.

We on the left should take real heart from the fact that the Renee Viellarises, Des Houghtons, Sharri Marksons, Chris Kennys, Judith Sloans, Piers Akermans, Andrew Bolts, etc, etc of this world will really believe they played a vital role in the elections outcome.

They will shorten the lifespans of their print mastheads and find themselves soon or later working in real PR where they belong.

In coming months, they will refocus on their shitty part-time jobs and their shitty wages and rising costs of living and come to realise these trickle-down tricksters they’ve put back into power are not all that interested in their problems.

5. The economy will worsen.

By all rights and logic, Labor should have won this election. After all, the poor bastards generally come in when everything’s about to turn to putty and then pay the price of a lengthy banishment to the political wilderness for their troubles.

Morrison might still be able to wrangle a surplus in 2019-21 but things are going to get very dicey even in the short-term.

His (and Turnbull’s) very badly thought-out plan to severely flatten the tax rates before the middle of next decade and put $230 billion back in people’s pockets is going to bite them in the bum. That’s $230 billion less in the government coffers to do, you know, silly government stuff like funding health and education and building vital things.

The duty of everyone on the left over the next three years is to finally put to rest this bullshit Tory mantra that only they can manage economies well. I forget how many years I’ve pleaded with Labor figures to make that their daily task; not something they trot out and give a run on the hustings.

The man who brought a lump of coal into Parliament as a ‘show-and-tell’ exercise is now well and truly wedged on climate change.

Scott Morrison is stuck with his inferior policies to battle global warming, the power to the people will not get any cheaper and Coal Minister Canavan is already crowing that Adani – and presumably some other fat turd’s coal mine plans – must be given the immediate coal-ahead.

The Mad Monk may have gone – and may he rest in Speedos – but the government is still full of right-wing nutters who don’t believe the science is settled on a warming planet.

If Nationals leader Michael McCormack thinks he’s safe from the Beetrooter because he kept all his lower-house seats and even got a modest swing to the Nats, then the disillusioned poor bastard probably thinks the Nationals really do look after country folk.

Barnaby’s got mouths to feed, an ego to nourish, and weekly drink bills to pay: he’s going to come a huntin’ sooner or late.

8. The “Messiah from the Shire” “Miracle Man” epithets will soon dissipate.

I appreciate many of us still have chuck buckets handy as the mainstream media lauds Morrison for his “brilliant” campaign tactics.

They were certainly effective but, please, let’s not call them honest or decent or respectable or fair.

Morrison just got to majority government – a few seats better than Turnbull did – and he had to bury his party’s logo and its recent history to do it. He hardly answered a single media question on the hustings, attacked Shorten personally in a presidential-style him-or-me strategy and wilfully distorted and in some cases plain out lied about Labor’s policies. Palmer’s $55 million ad blitz put the icing on the cake.

As mentioned above, Shifty Shorten is gone. He can’t put his hands in voters’ pockets any more.

And given time, Australians will increasingly realise just how mind-numbingly average Morrison is, both in character and political belief.  The next black head I squeeze has more Christianity to it than the happy-clapping slogan bogan #liarfromtheshire.

9. On-going scandals will not go away

There’s a whiff about the Abbott/Turnbull/Morrison government that in normal circumstances would have cost them the May 18 election.

10. The anger among Labor and other left-leaning people will not abate.

As mentioned at the top of this rant, I reckon close to half of Australia is upset, bewildered and in many cases furious about the election outcome.

If Labor had won, those on the right would have been perfectly entitled to shrug their shoulders, mutter “fair cop” and spend the next term hoping that all their claims against Labor’s suite of policies proved correct so they could then return to the government benches which is their God-given right so to do.

Those on the left feel life is unfair, the system hasn’t worked for them and their side of politics always has a much harder job getting into power now and then.

They are still scratching their heads as to how the political commentariat, the bookies and the pollsters got it so terribly wrong.

There’s an ongoing anger there that no amount of “poor loser” jibes or right-wing goading will assuage. Those on the right should be very mindful and have the good sense not to stir them up more than they already are.