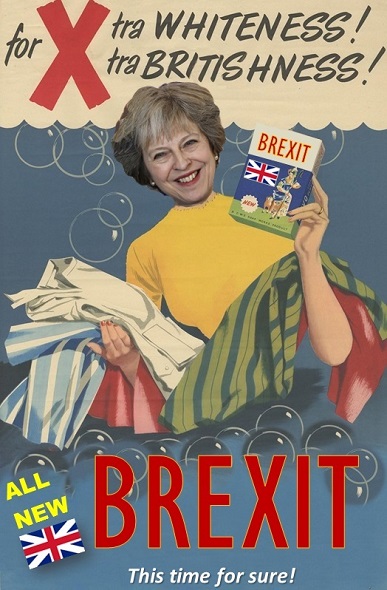 British Prime Minister Theresa May has launched a public offensive including a high-powered advertising campaign to sell her latest Brexit plan, but observers doubt she will succeed in having it passed by the UK parliament.

Mrs May is starring in radio, television, and print advertisements for her “new” Brexit plan (main picture).

The advertisements take a harder line than her previous public arguments.

“I’m really cutting to the chase in the arguments I’m mounting with colleagues in the Conservative Party and other MPs,” Mrs May said.

“Let’s face it, Britons told us at the 2016 referendum that they wanted to leave the European Union largely because they dislike ‘the Frogs, Krauts, and Wogs’ running the EU in Brussels who supposedly tell us what to do in our daily lives.

“In addition they are all spooked by the refugees they believe are coming to take their jobs and take over their suburbs.

“While those of us in politics can endlessly debate the subtleties of Brexit and its implications, as we have done for the past two years, average Britons see it as a black and white issue. The whites simply hates the blacks.

“So my new ad campaign sells my latest Brexit plan essentially as a way to keep Britain white.

“Of course advertising standards don’t let us say that outright, but I don’t think anyone will miss the message.”

At a media conference he called at the top of the recently refurbished Big Ben clock tower at the Houses of Parliament, Mr Johnson said the Prime Minister’s plan was not acceptable.

“I will be voting against it. We can and must do better,” he said while beginning to abseil in a Borat-style thong down the side of the tower.

When asked what “doing better” would entail and whether he would table his own Brexit plan, Mr Johnson began whistling a medley of 1960s British TV sitcom themes and continued his descent.