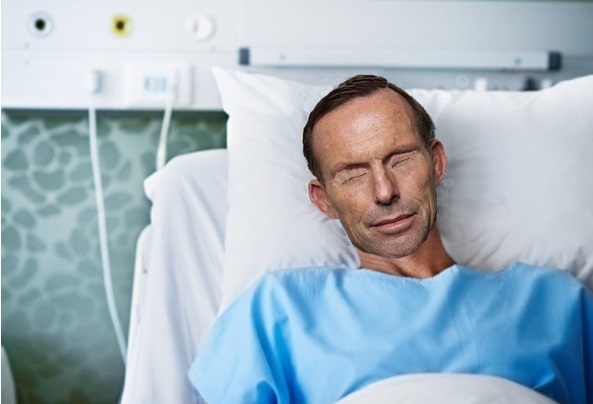 Liberal Party strategists appalled by research showing a lift for Labor following Bob Hawke’s death have “killed off” one of their own former PMs in a desperate bid to snatch election victory today.

Tony Abbott was to have spent polling day visiting booths in his Warringah electorate but instead has been placed in an induced coma in a north Sydney hospital.

A party insider speaking to The Bug on condition of anonymity said their research showed the Labor Party had received a slight but vital lift in support as Australians remembered the record in government of former Prime Minister Bob Hawke who died on Thursday.

“Everyone taking part in last night’s campaign strategy phone hook-up just shit themselves, some quite literally, when the figures were read out,” the insider said.

“The lift was only a fraction of a percentage point in most marginals, but it’s sufficient in a very tight race to make it easier for Labor to win.

“Someone in the strategy group mused out loud about how handy it would be if one of our own former PMs died before the polls closed to give us a boost too.

“Then everyone suddenly realised it was a feasible idea, but we needed to act quickly if we were to pull it off.

“Of course it wouldn’t be necessary for one of our three living former PMs to actually die.

“It would be sufficient just to create the impression that one had, to generate public sympathy and maybe change a few votes.

“They could easily ‘recover’ on Sunday, well after the votes had been counted. We’d just say doctors misdiagnosed the ex PM’s condition.

“Of course the immediate question was which former PM could we choose?

“The unanimous choice of the strategy group was Malcolm Turnbull because he was the least unpopular and he did have a few policies there for a while. But he’s in the USA and would hardly be willing to help us out.

“Then we switched our focus to John Howard and everyone agreed having him ‘die’ would trigger the sort of voter reaction we wanted, especially among the 80-year-old to 95-year-old demographic. 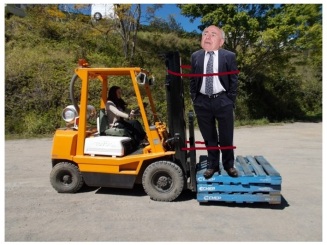 “But Howard’s own popularity effectively ruled him out of consideration because of the number of high-tech animatronic ‘John Howards’ the party has shipped to key marginal seats in a number of states for election day street walks and appearances outside polling booths (pictured).

“It would be a logistical nightmare to recall all of them. So that left Tony Abbott.

“While having Tony in a ‘coma’ may not spark the same reaction as Howard, our research showed it might actually help him in his own seat as well.

“Not because of any sympathy vote, but because Tony wouldn’t be able to aaah….aaah…aaaah mix with and talk to voters on election day and lose even more votes,” the insider joked with what was, admittedly, not a bad impersonation of a fake Tony Abbott laugh.

“The only problem we had was to track down Tony and drug him.

“When he got wind of the plan around 7.30 last night, he took off like a scalded cat. He’s a fit bugger, and fast.

“But we cornered him at the Manly ferry terminal trying to flee the electorate and he’s now sleeping soundly until at least Sunday (main picture),” the insider said.

Local rag The Manly Daily (below) is just one of many Murdoch mastheads that happily went along with the ruse in their election-day issues.