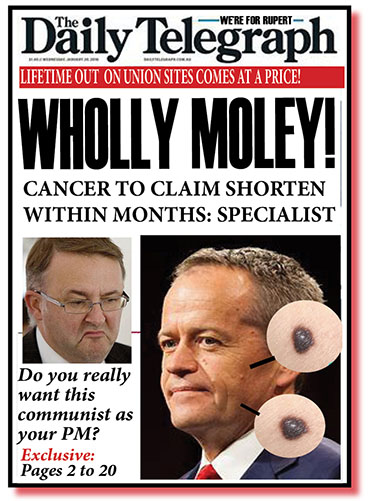 This is the second in our world exclusive series after Daily Telegraph editor Ben English invited The Bug into the newspaper’s Sydney HQ to show off some of the News Corp Australia front pages being prepared for that masthead and other Murdoch tabloids around Australia in the final days of Campaign 2019.

Yesterday’s report told our loyal readers of the paper’s planned front page for today (pictured above) and its final assault on Shorten and Labor on Saturday morning with very graphic images of Shorten fucking dogs that senior News Corp Australia executives believe will be the campaign’s game changer.

When English showed The Bug the front pages for Thursday and Friday for Murdoch mastheads around the nation, we finally knew Shorten and Labor were in deep, deep trouble.

We take up the conversation as English showed us the third monitor in the paper’s art department.

English: This will be the front page of the Daily Tele, Courier-Mail, Herald Sun, Advertiser, Hobart Mercury and West Australian on Thursday morning. A lot of other News Corp regional titles too.

English: Thanks. GROPERBILL is great, isn’t it. Right under the jockey line: Women MPs ropeable over….

The Bug: What’s the species of groper you’ve got Bill’s face on there? Looks like the common Queensland groper, Epinephelus lanceolatus?

English: You’re spot on, once again. Queensland is a battleground state so we thought that was the way to go. And besides, Shorten certainly does like to use his lance a lotus, eh?

The Bug:  Very good. And I can see from the write-off that Michaelia Cash and Pauline Hanson are certainly making some pretty horrific allegations about Mr Shorten’s behaviour towards them in Parliament House. Much more damaging than their comments last year.

English: They were definitely afraid to be alone in any room with him.

The Bug: We appreciate that but do you think this line of attack is going to be effective. I mean really: Cash and Hanson? He wouldn’t preference either of them, would he?

English: Fair point but we think it’s going to have an enormous impact with normal women the way the world is going at the moment.

The Bug: Me too. So what’s the front page for all the News Corp Australia papers on Friday?

English: Come over to these monitors here and I’ll show you. In fact you might be able to help us decide. We’re in two minds at the moment. As you can see from this one here, we’re revealing that Shorten is really an alien who has the most wicked of plans for world domination. He mainly eats babies.

The Bug: And the one over here?

English: That’s the follow up to the Wednesday splash. We reveal that Groperbill is also Octopussy Bill who is a sex maniac with at least 12 mistresses around the country and at least a half-dozen bastard children with more on the way.

The Bug: There are some parts of Australian where that news might improve his vote?

POSTSCRIPT: It appears the front-page (at top) that English told The Bug was to be Wednesday’s splash around the Murdoch stable was substituted at the last moment for one proclaiming Shorten THE GREAT DIVIDER (below).