The Bug has finally beaten @GhostWhoVotes to the punch, revealing the results some four hours earlier than their usual 9.37.45pm Sunday “leaking” by a sub-editor via mobile phone in a dunny at The Australian‘s Sydney newsroom.

In the poll, conducted from last Wednesday to Saturday with 1645 respondents, Christian and decent knockabout bloke Prime Minister Scott Morrison has stayed 20 points clear of Bill Shorten as preferred PM.

While the figures have remained unchanged at 52% to 32% from a fortnight ago, The Australian front-page splash has Morrison “extending” his lead. But that’s okay because sometimes when the lead has narrowed, the paper has happily used “maintained” to describe the PM’s lead – and after all, when has journalistic accuracy ever mattered when pushing Rupert Murdoch’s anti-Labor agenda?

In an accompanying article over numerous broadsheet pages in tomorrow’s paper, doyen of political reporters, the highly respected Paul Kelly, will opine that Labor is now almost certain to be defeated in the looming federal election, especially as it has now been so effectively wedged by brilliant Liberal strategists over “Shorten’s Bill to allow some 1000 paedophiles, rapists and murderers onshore”.

Kelly writes of the 20-point gap in Morrison’s favour: “It’s a massive gap and one from which an Opposition Leader has never, ever, in Australian political history attained the privilege of being this nation’s leader, especially at a time when the economy is booming and jobs abound, meaning everyone who has a go will get a go.

“Apart from showing that Mr Morrison and his strong, united ministerial team are now beginning to reap the rewards of good, strong, stable economic management that only the LNP has ever been able to provide for this nation, it’s important to once again restate the fact that no Opposition Leader has ever become the nation’s leader from such a poor standing on the most crucial of all Newspoll comparisons, especially if a people-smuggling boat should try to make its way here anytime between now and the election. 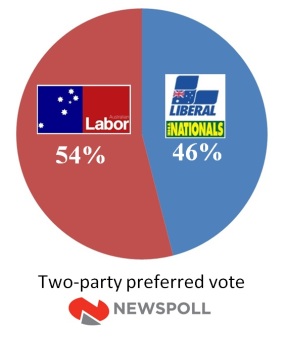 In the poll, the simple question was put to respondents: “Who do you prefer to have as YOUR Prime Minister: Scott Morrison, a man not just of God but close enough to our Maker that He can speak directly to the Australian people through the PM even though we won’t have a clue what Our Heavenly Father will be saying, or ‘shifty’ Bill Shorten, whose only voices he hears are those of the criminal left-wing unions directing everything he says or does with the aim of destroying the very fabric of Australian society and handing our nation over to their own Trotskite/Leninist/Stalinist heathen masters in Moscow?”

In other #newspoll news, the two-party preferred vote has improved slightly for the Opposition, with Labor now enjoying a commanding lead 54%-46%, up from 53%-47% two weeks ago. Primary figures to come.