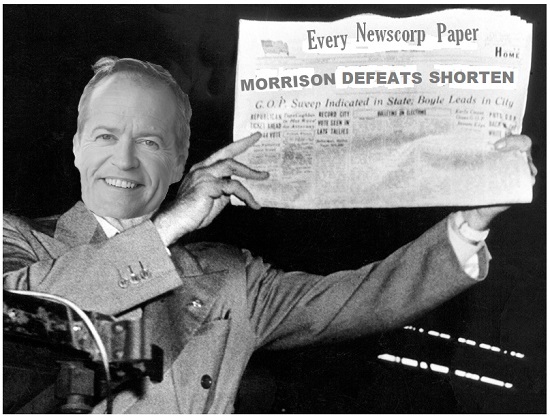 Mr Shorten made the unambiguous threat yesterday as the faux campaign for the expected May election continues to heat up.

And it’s the second time in several days that Shorten has taken it up to the New York-based media mogul, long regarded as the one person you need onside to succeed in Australian politics.

Shorten declared he had no desire to take up an invitation to meet face-to-face with Murdoch in the Big Apple – or anywhere else for that matter.

In today’s rebuff to the media tycoon, Shorten announced a panel of five eminent persons from mainstream journalism and academia would be appointed by Labor to assess the “fairness and balance” of the campaign reporting by Newscorp mastheads. A negative post-election report from the panel would see a complete ban of federal government advertising for the first term of a Shorten Labor government.

“Why are we singling out News Corp Australia and not all media outlets? Just look at their track record over recent state and federal elections,” Mr Shorten said.

“Our challenge to News Corp mastheads is simple. For example, if a Murdoch paper devotes space to LNP propaganda saying our negative-gearing proposals are going to destroy the residential housing market, it needs to devote similar space to Labor’s argument that it will do nothing of the sort. Likewise for any industry ‘experts’ both sides are likely to present.

“If a News Corp masthead devotes four pages to the campaign on any given day, Labor expects and deserves a fair and equal share to match what the LNP gets.

“If Labor uncovers a ‘black hole’ in LNP costings, we expect it to be given the same weight as any supposed ‘black hole’ the government finds in our figures.

“We will also be asking our panel to keep an eye on ‘editorial’ comment. A paper has every right to express its preference for the election victor. They can do it on the front page. I and my Labor team don’t care. But they should do it once.

“It should not be an almost daily occurrence as we’ve seen in recent state and federal polls.

“News Corp has a monopoly in a number of city and town markets;  a clear majority of circulations in others. It has a professional and ethical duty to give Australian voters the fair and balanced information needed to make their vote count in this most crucial of federal elections.”

THE BUG editors’ comment: There was nothing at all funny about that story, right? It’s complete bullshit, of course. But wouldn’t it be great if it wasn’t? And, really, what would Shorten have to lose if he issued such a threat?

The idea of a panel is just a hands-off mechanism to highlight what’s to come. Of course News Corp Australia is going to be totally unfair to Labor. That’s a given. The attacks on Shorten and Labor by the Herald-Sun, Daily Telegraph, The Courier-Mail and other Murdoch mastheads are going to be horrendous. They are already being ramped up. The attacks are going to be totally unprofessional and against any of the basic principles of fairness and balance in journalism.

Shorten could not possibly make it any worse by showing some balls and taking the Dirty Digger on. We want to hear Shorten shout: “C’mon, Rupe. Give us your best shot!”

Besides, The Bug believes the more outrageously right-wing Rupe’s rotten rags are, the more lasting damage they will do to their dwindling brands while further reducing any effectiveness their disillusioned editors still think they have in shaping public opinion, if that’s at all possible.