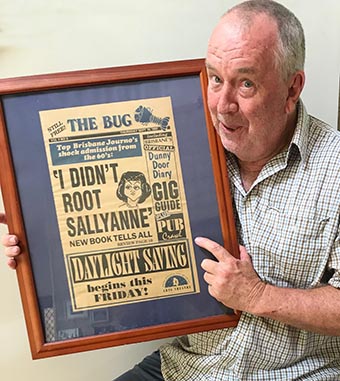 The brains (well, it’s more like one brain seeing it’s actually two half-wits combined) behind Australia’s oldest satirical publication have popped the corks on some quality faux champers after the internet sensation smashed its daily blog views and visitor numbers.

“Our stats graph is starting to look like the skyline around Green Square and Mascot in Sydney,” one of the two proud journos who own and operate The Bug, but who can’t be named due to strict parole conditions, said. “We’re Meritoning along nicely.

“The exact statistics can’t be revealed as they are still far, far below the figures mentioned in The Bug’s advertising kit.”

The co-publisher (pictured at top with one of The Bug’s more notorious front covers during its print-media heyday) wiped away tears as he told himself (half of The Bug) that the surge in support for the site showed there was still a hunger in the Australian public for a sustained, high-quality satirical look at politics, sport, entertainment and life in general.

“So thank God we’ve got The Shovel, the Betoota Advocate, The Chaser and The UnAustralian to provide just that,” the publisher said.

“Almost all of the unusually high post visits and visitor numbers these past four weekends for The Bug have been from people who’ve been Googling when the ABC’s Insiders is resuming for 2019 and who have mistakenly clicked on one of our silly yarns about the show’s format for its new season.

“Stupid bastards! Still, we thank them for that and we’re kinda hoping Insiders never comes back as we could very well end up with a product worth something one day.

“In fact, we’re seriously thinking of putting through a bomb threat to the ABC’s Southbank studios in Melbourne every Sunday from now on so the show can never come back.

“We know the Talking Pictures segment is taped earlier, so does anyone know when they do that? We’re happy to make the call. We’re on a real roll here.”